The Ferrari 599 GTB Fiorano is the successor of the 575M and has since been succeeded by the Ferrari F12. The 599 made its debut at the Geneva Motor Show on February 28, 2006. It was designed by Pininfarina under the supervision of Ferrari stylist, Frank Stephenson. Its name comes from the total engine size (5999 cc), Gran Turismo Berlinetta characteristics and the Fiorano test track of

The V12 engine of the 599 GTB Fiorano is originally from the Enzo and produces 620hp at 7600 rpm. Its 607 Nm of torque is also unmatched by any other Ferrari GT. The most adjustments that had to be made to the engine was to limit the height. Because the engine in the Enzo is in the middle, there is more space than in the 599 where the engine is placed at the front.

There is a choice between two different gearboxes in the 599, a six-speed manual gearbox or a six-speed semi-automatic gearbox called F1 Superfast. The car is not equipped with the e-diff that can be found in the F430, but with the magnetic dampers that make the car comfortable, but still good in the corners, according to some journalists.

The 599 is the first Ferrari to have the new traction system called F1-Trac. Ferrari claims that with this system, co-developed by Michael Schumacher, anyone can complete a lap on the Fiorano circuit that is just a second slower than Michael. 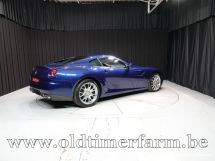