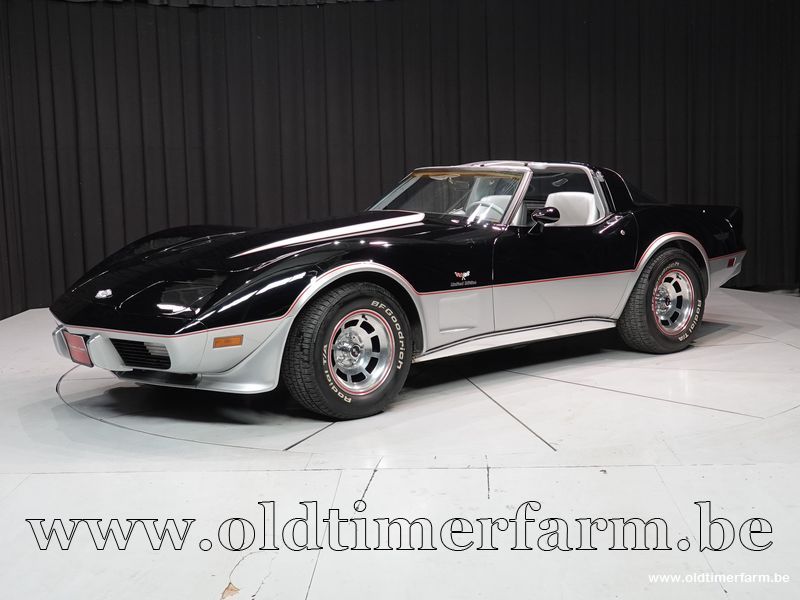 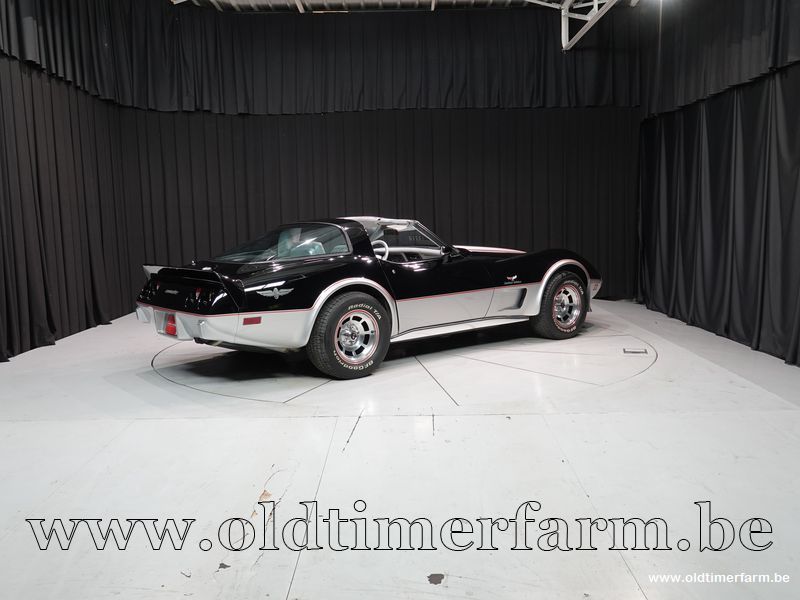 The third generation Corvette, patterned after the Mako Shark II concept car, was introduced for the 1968 model year and was in production until 1982. C3 coupes featured the first use of T-top removable roof panels. It introduced monikers that were later revived, such as LT-1, ZR-1, and Collector Edition. In 1978, the Corvette's 25th anniversary was celebrated with a two-tone Silver Anniversary Edition and an Indy Pace Car replica edition of the C3. This was also the first time that a Corvette was used as a Pace Car for the Indianapolis 500. Engines and chassis components were mostly carried over from the C2, but the body and interior were new. The 350 cu in (5.7 L) engine replaced the old 327 cu in (5.36 L) as the base engine in 1969, but power remained at 300 bhp (224 kW). 1969 was the only year for a C3 to optionally offer either a factory installed side exhaust or normal rear exit with chrome tips. The all-aluminum ZL1 engine was also new for 1969; the special big-block engine was listed at 430-hp (320 kW), but was reported to produce 560 hp (420 kW) and propelled a ZL1 through the 1/4 mile in 10.89 seconds.

In 1971, to accommodate regular low-lead fuel with lower anti-knock properties, the engine compression ratios were lowered which resulted in reduced power ratings. The power rating for the 350 cu in (5.7 L) L48 base engine decreased from 300 to 270 horsepower and the optional special high performance LT1 engine decreased from 370 to 330 horsepower. The big-block LS6 454 was reduced from 450 to 425 bhp (317 kW), though it was not used in Corvettes for 1970; it was used in the Chevelle SS. For the 1972 model year, GM moved to the SAE Net measurement which resulted in further reduced, but more realistic, power ratings than the previous SAE Gross standard.  Although the 1972 model's 350 cu in (5.7 L) horsepower was actually the same as that for the 1971 model year, the lower net horsepower numbers were used instead of gross horsepower. The L48 base engine was now rated at 200 bhp (150 kW) and the optional LT1 engine was now rated at 270 bhp (200 kW). 1974 models had the last true dual exhaust system that was dropped on the 1975 models with the introduction of catalytic converters requiring the use of no-lead fuel. Engine power decreased with the base ZQ3 engine producing 165 bhp (123 kW), the optional L82's output 205 bhp (153 kW), while the 454 big-block engine was discontinued. Gradual power increases after 1975 peaked with the 1980 model's optional L82 producing 230 bhp (172 kW).

Styling changed subtly throughout the generation until 1978 for the car's 25th anniversary. The Sting Ray nameplate was not used on the 1968 model, but Chevrolet still referred to the Corvette as a Sting Ray; however, the 1969 (through 1976) models used the "Stingray" name as one word, without the space.[30] In 1970, the body design was updated including fender flares, and interiors were refined, which included redesigned seats. Due to government regulation, the 1973 Corvette's chrome front bumper was changed to a 5-mile-per-hour (8 km/h)system with a urethane bumper cover.[31] 1973 Corvettes are unique in that sense, as they are the only year where the front bumper was polyurethane and the rear retained the chrome two-piece bumper set. 1973 was also the last year chrome bumpers were used. The optional wire-spoked wheel covers (left) were offered for the last time in 1973. From 1974 onwards both the front and rear bumpers were polyurethane.

In 1974, a 5-mile-per-hour (8 km/h) rear bumper system with a two-piece, tapering urethane bumper cover replaced the Kamm-tail and chrome bumper blades, and matched the new front design from the previous year. 1975 was the last year for the convertible, (which did not return for 11 years) and Dave McLellan succeeded Zora Arkus-Duntov as the Corvette's Chief Engineer.[32] For the 1976 models the fiberglass floor was replaced with steel panels to provide protection from the catalytic converter's high operating temperature. Stingray 15 model years where the names Corvette, Sting Ray, and Stingray were synonymous. 1977 was last year the tunneled roof treatment with vertical back window was used, in addition leather seats were available at no additional cost for the first time. The black exterior color returned after a six-year absence.

The 1978 25th Anniversary model introduced the fastback glass rear window and featured a new interior and dashboard. Corvette's 25th anniversary was celebrated with the Indy 500 Pace Car limited edition and a Silver Anniversary model featuring silver over gray lower body paint. All 1979 models featured the previous year's pace car seats and offered the front and rear spoilers as optional equipment.  53,807 were produced for the model year, making 1979 the peak production year for all versions of the Corvette. Sales have trended downward since then.  In 1980, the Corvette received an integrated aerodynamic redesign that resulted in a significant reduction in drag. After several years of weight increases, 1980 Corvettes were lighter as engineers trimmed both body and chassis weight.[8] In mid-1981, production shifted from St. Louis, Missouri to Bowling Green, Kentucky, and several two-tone paint options were offered. The 1981 models were the last available with a manual transmission until well into the 1984 production run. In 1982, a fuel-injected engine returned, and a final C3 tribute Collectors Edition featured an exclusive, opening rear window hatch.

A Pace Car (US), Safety Car (GB), even Voiture de sécurité (Fr) limits the speed of competing cars on a racetrack in the case of a caution period such as an obstruction on the track or bad weather. The aim of the safety car is to enable the clearance of any obstruction under safer conditions, especially for marshalls and/or await more favourable track conditions weather-wise.

The first reliance on this safety measure occurred with the deployment of a pace car during the inaugural Indianapolis s500 in 1911.