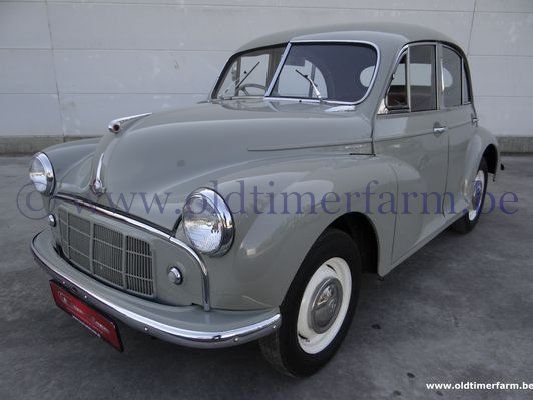 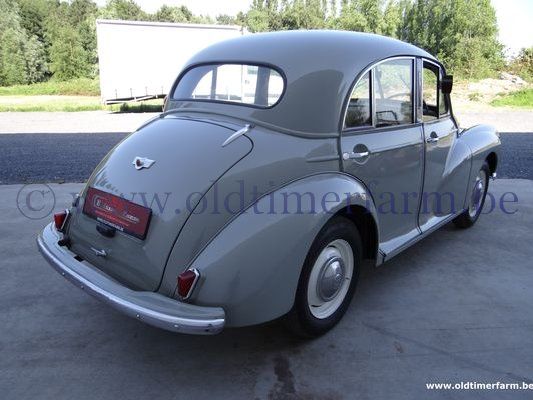 (from Wikipedia, the free encyclopedia) Sir Alec Issigonis' concept was to combine the luxury and convenience of a good motor car at a price affordable by the working classes. The Minor was a roomy vehicle with superior cornering and handling characteristics. Internal politics inside BMC, the owner of Morris, may have led to the limited North American sales. The Minor prototype had been known as the Morris Mosquito. More than 1.3 million of the lightweight, rear-wheel drive cars were eventually produced, mainly in Cowley, Oxfordshire, becoming Britain's first million seller, and exported around the world, with many variants of the original model. Production continued in Birmingham, England until 1972 (for the commercial variants and estate only). The last Morris Minor (commercial) was assembled at Stoke, Nelson, New Zealand in 1974.
The Minor has been described as typifying "Englishness", a "British icon" and a "design classic".
The original Minor MM series lasted from 1948 until 1953. It included a pair of 4-seat saloons, 2-door and (from 1950) 4-door, and a convertible 4-seat Tourer. The front torsion bar suspension was shared with the larger Morris Oxford, as was the almost-unibody construction. Although the Minor was originally designed to accept a flat-4 engine, with four distinctive gaps in the engine bay to accommodate it, late in the development stage it was replaced by a 918 cc (56.0 cu in) side-valve straight-4 pretty much unchanged fron the outgoing Morris 8, and producing 27.5 hp (21 kW) and 39 lbf·ft (53 N·m) of torque. This little engine pushed the Minor to just 64 mph (103 km/h) but delivered 40 miles per imperial gallon (7.1 L/100 km; 33 mpg-US). Brakes were 4-wheel drums.
Early cars had a painted section in the centre of the bumpers to cover the widening of the production car from the prototypes. This widening of 4 inches (102 mm) is also visible in the creases in the bonnet. Exports to the United States began in 1949 with the headlamps removed from within the grille surround to be mounted higher on the wings to meet local safety requirements. In 1950 a four-door version appeared, initially available only for export, and featuring from the start the headlamps faired into the wings rather than set lower down on either side of the grille. The raised headlight position became standard on all Minors in time for 1951. From the start, the Minor had semaphore-type turn indicators, and subsequent Minor versions persisted with these until 1961. An Autocar Magazine road test in 1950 reported that these were "not of the usual self-cancelling type, but incorporate[d] a time-basis return mechanism in a switch below the facia, in front of the driver". It was all too easy for a passenger hurriedly emerging from the front passenger seat to collide with and snap off a tardy indicator "flipper" that was still sticking out of the B-pillar, having not yet been safely returned by the time-basis return mechanism to its folded position.
Another innovation towards the end of 1950 was a water pump (replacing a gravity dependent system) which permitted the manufacturer to offer an interior heater "as optional equipment". When production of the first series ended, just over a quarter of a million had been sold, 30% of them the convertible Tourer model.
A tourer tested by the British magazine The Motor in 1950 had a top speed of 58.7 mph (94.5 km/h) and could accelerate from 0–50 mph (80 km/h) in 29.2 seconds for the 1098cc engine. However, the 918cc(56.01CID) engine did 0-60 mph in 50+ seconds. A fuel consumption of 42 miles per imperial gallon (6.7 L/100 km; 35 mpg-US) was recorded. The test car cost £382 including taxes.
In 1952, the Minor line was updated with an Austin-designed 803 cc (49.0 cu in) overhead valve A-Series engine, replacing the original side-valve unit. The engine had been designed for the Minor's main competition, the Austin A30, but became available as Austin and Morris were merged into the British Motor Corporation. The new engine felt stronger, though all measurements were smaller than the old. The 52 second drive to 60 mph (97 km/h) was still calm, with 63 mph (101 km/h) as the top speed. Fuel consumption also rose to 36 miles per imperial gallon (7.8 L/100 km; 30 mpg-US).
An estate version was introduced, known as the Traveller (a Morris naming tradition for estates, also seen on the Mini), along with van and pick-up versions. The Traveller featured an external structural ash (wood) frame for the rear bodywork, with two side-hinged rear doors. The frame was varnished rather than painted and a highly visible feature of the body style. Rear bodies of the van versions were all steel. The 4-seat convertible and saloon variants continued as well.
The grille was modified in October 1954, and a new dashboard with a central speedometer was fitted. Almost half a million examples had been produced when the line ended in 1956.
The Motor magazine tested a 4-door saloon in 1952. It reported a top speed of 62 mph (100 km/h) and acceleration from 0–50 mph (80 km/h) in 28.6 seconds. A fuel consumption of 39.3 miles per imperial gallon (7.19 L/100 km; 32.7 mpg-US) was recorded. The test car cost £631 including taxes.
The car was again updated in 1956 when the engine was increased in capacity to 948 cc (57.9 cu in). The two-piece split windscreen was replaced with a curved one-piece one and the rear window was enlarged. In 1961 the semaphore-style trafficators were replaced by the flashing direction indicators, these were US-style red at the rear (using the same bulb filament as the brake lamp) and white at the front (using a second brighter filament in the parking lamp bulb) which was legal in the UK and many export markets at the time (such as New Zealand). An upmarket car based on the Minor floorpan using the larger BMC B-Series engine was sold as the Riley One-Point-Five/Wolseley 1500 beginning in 1957: versions of this Wolseley/Riley variant were also produced by BMC Australia as the Morris Major and the Austin Lancer.