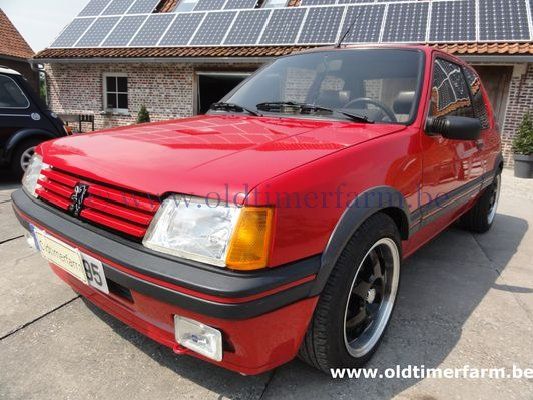 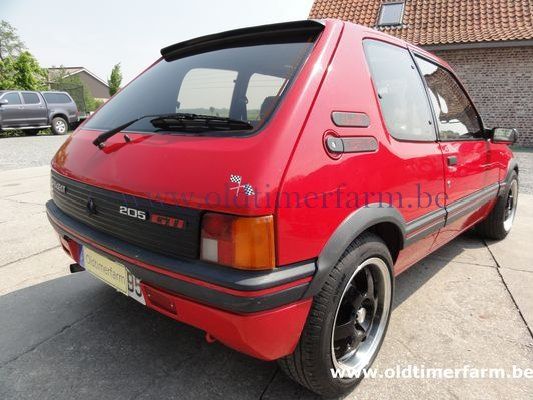 Reference ch.5536 Red
Make Peugeot
Model 205 GTI 1.9 Red
Type berline
Construction year 1989
KM 133198
Cilinder displacement 1900
Gears manual
Steering left hand drive
from Wikipedia, the free encyclopedia) The Peugeot 205 is a supermini produced by the French car manufacturer Peugeot between 1983 and 1998. It was declared 'Car of the Decade' by CAR magazine in 1990. The 205 won 1984 What Car? car of the year. The styling of the 205 is often thought to be a Pininfarina design, however Gerard Welter claims it as an in-house; Pininfarina only styled the Cabriolet. It is often credited as the car which turned Peugeot's fortunes around. Before the 205, Peugeot was considered the most conservative of France's "big three" car manufacturers, producing large saloons such as the 504 and 505. The genesis of the 205 lay within Peugeot's takeover in 1978 of Simca, which had the necessary expertise in making small cars. Early 205s used the "Douvrin" engine from the older Peugeot 104, although these were later replaced with the newer XU and TU-series engines, which were of PSA design. Engines ranged from 954 cc to 1905 cc engine displacement, in carburetor or fuel injected petrol and diesel versions. Its use of the now standard PSA Peugeot Citroën suspension layout of Macpherson struts at the front, with torsion bar suspension rear suspension, that debuted in the Peugeot 305 estate, was a key ingredient of the success of the 205. This is fully independent using torsion bars (Torsion spring) and trailing arms. It is very compact and was designed to minimise suspension intrusion into the boot, giving a wide flat loadspace, while providing excellent ride and handling. It was launched on 24 February 1983.[1] Shortly after its launch, it was narrowly pipped to the European Car of the Year award by the similar sized Fiat Uno, but ultimately (according to the award organizers) it would enjoy a better image and a longer high market demand than its Italian competitor.[2] The diesel models employed the XUD PSA Diesel inline-four engine, lifted from the Citroën BX which was introduced in 1982. These XUD engines has a capacity of 1769 cc (XUD7) and 1905 cc (XUD9) and are closely related to the XU5 and XU9 petrol engines in the BX16 and BX19 of the time respectively, as well as the engines later used in the 205 GTI 1.6 and Automatic (also 1.6) and GTI 1.9 respectively (other Peugeot/Citroën [PSA] products, such as the 305 and Talbot Horizon as well as the BX, used the XUD9 1905 cc Diesel engine of the same capacity as the 205 GTI 1.9 and Citroën BX 19 petrol engined models). The XUD7 (and XUD9) Diesel Engines were world-beating and so petrol-like that many buyers were won over by petrol car performance combined with diesel economy. The 205 GRD (1.8 Diesel, 59 bhp (44 kW), 78 lbft (105.8 Nm)), for instance, was as fast yet smoother than the 205 GR (1.4 Petrol, 59 bhp (44 kW), 78 lbft (105.8 Nm)), due to the engine developing peak torque at much lower rpm, while using much less fuel. There were also various versions intended for commercial use, such as the two-seater XA-series. There was also the "205 Multi", a tall-bodied special version on XA or XE-basis built by independent coachbuilders like Gruau and Durisotti. Gruau called their XA-based two-seater version the "VU", while the five-seat XE-based version was called the "VP". Durisotti began building the 205 Multi in 1986; it was called the "205 Multi New Look".[3] In 1991, the 205 DTurbo was launched with a powerful, turbocharged version of the 1769cc diesel engine. This was considered to be the diesel equivalent of the GTi models. The 205 was an instant hit, and the styling parameters that it set were echoed in every Peugeot model that was to follow. The exterior styling was never face lifted or significantly altered in its 15-year production run. There was a dashboard redesign for the 1988 model year, and in late 1990 the 205 received new door design and cards, clear front indicators, new 'smoked' rear light clusters, single point petrol injection and catalytic converters were introduced, to meet the new 1992 pollution limits. The Peugeot 205 was discontinued in the UK in 1996, 205s have been known to be registered as late as August 1996 putting them on a "P" plate, late 205 models are easily found registered in 1995 which puts them on an "N" plate both models are generally found sporting the "Style" or "Forever" brandings with decals on the doors and wings with a "205" decal on both doors. It is believed that the 1996 model 205s are most commonly found in two colours consisting of either Red or a Metallic Blue/Grey, the metallic colour more seldom seen than the Red - but both cars on a "P" plate are quite rare. The single biggest visual difference between very late 205s (1993 on) and earlier ones, is the deletion of the black louvred plastic panel between the rear lights on the tailgate. It is just painted body colour. In Continental Europe, 205 production was gradually slowed down following the introduction of the joint replacement models, the 106, and 306. The Peugeot 205 was still offered in the "Sacré Numéro" and "Génération" models until the end of the production in 1998. Due to the pressure from the market, the company finally built a direct replacement in the 206, which was launched in 1998. 5,278,050 Peugeot 205s have been sold, and a large percentage of them are still in circulation as of 2009.[clarification needed] As of April 2011, there are now fewer than 19,000 on the road in the UK, compared to the peak high of 374,773 as of December 1994.[4] The 205 was first available as a GTI in 1984 and was initially powered by a 1.6 petrol engine. The 1.9 GTI was launched in 1986 and the 1.9 engine was also used in the GTI version of the larger 309. Specifications. Bodywork. Length/width/height/wheelbase  cm (in) : 370/157/137/242 (146/62/54/95.3); weight : 875 kg (1929 lb). Engine. Front mounted straight 4 1905 cc (116 ci), 8 valves, Bosch L-Tronic injection, 4 spped manual gearbox, front wheel drive. Maximum power : 130 bhp @ 6000 rpm; torque : 161 Nm @ 4750 rpm. Top speed : 198 km/h (123 mph); 0 - 60 mph in 7.6 sec.
Read more