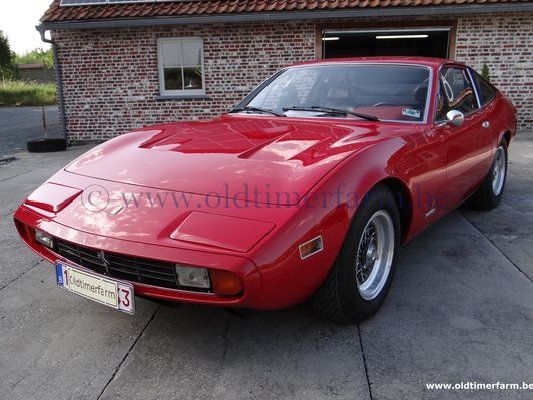 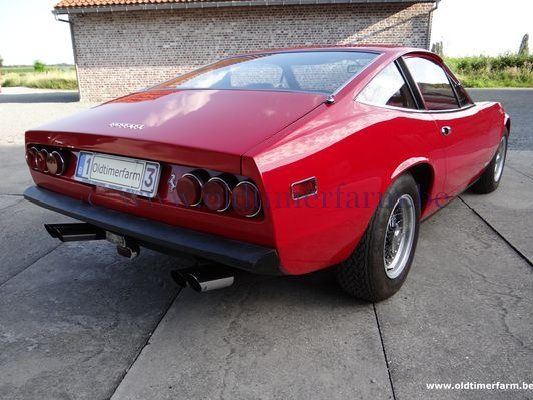 The 365 GTC/4's relatively low production run (505 units) makes it much less well known than models such as the Daytona and 246 GT Dinos, both of which were manufactured at the same time. Additionally, it didn't fit too well into the product line -- it wasn't the high-performance coupe that the Daytona was, yet its back seats weren't suited for anyone to actually sit on so it didn't fill the bill as a 4 seat replacement for the 365 GT 2+2. Still, it is one of the best driving V-12 Ferraris ever made.
As is the tradition with Ferrari, the bodywork was designed by Pininfarina in Turin and, unlike the Daytona that had its bodies constructed by Scaglietti in Modena, those of the GTC/4 were also produced by Pininfarina and then shipped to Maranello for completion. Finished entirely from steel with the exception of an aluminium bonnet and rear lid, some knocked the styling, questioning its apparently âun-Ferrari-likeâ appearance. While the looks were panned as being too boring in 1971, they have proven themselves graceful and timeless, as so many fine Pinninfarina styles do.
A number of interesting features were incorporated on Pininfarina's design for the GTC/4 and its lines become more and more attractive the closer they are studied. Most immediately apparent is the distinctive matte black synthetic resin noseband that replaced traditional chrome bumper trim for the front of the car, a detail unique to this model. Indeed, matte black was also used for the rear bumper and tail-light panel. Both features contributed to the refreshing lack of chrome and this cars cleanliness of line, a practice initially begun on the Daytona. While the black bumpers did not meet universal approval, they are quite tasteful compared to the huge units applied to the Lamborghinis of the time. Two other details worthy of mention were the extremely low bonnet with its retractable headlights and that Kamm tail featuring the de-rigueur round Ferrari tail lights, six in number.
It is a much lower and more exotic looking car than the boxy 400-series 2+2s that replaced it, and is more angular and modern looking than the 365 GTC and 365 GT2+2 that preceded it. The side profile is low and graceful, without the need for excessive scoops and ducts. The rear three-quarter view of a GTC/4 exudes restrained power and early seventies Pininfarina style.
The cabin was to a completely new design and featured an instrument binnacle that was now becoming ever more integrated into the central console in a move that was to suggest the style for years to come. Overall, the interior was more comfortable and refined than that of the Daytona and offered a good deal more luggage room plus two small seats although these were best folded down for additional storage space. Indeed, this cabin allocated rear occupants with a much smaller degree of legroom than previous 2+2 models, a factor attributable to it's drastically reduced wheelbase. Air conditioning was fitted as standard but so were cloth seat centers with leather bolsters, a full Connolly leather interior being optional (15505 is so equipped).
The lovely 4.4 liter V-12 engine provides great power and torque and the exhaust system on the 365 GTC/4 makes a deep throaty rumble which is much more aggressive sounding than even that of the Daytona. Opening the hood always impresses. Everything comes in multiples with this car. The six side-draft carburetors necessitated by the low hoodline sit flat atop the motor, making it appear big and wide, which it is. In the center of the 4 camshafts are two oil filters to clean the 18 quarts of oil required by the engine, along with the complex throttle linkage required to open the 12 throats of those 38DCOE Webers. Tucked under the cowl are the two distributors, housing 2 sets of points each and sparked by two "dinoplex" electronic coil units mounted on the fender wells.
Specifications. Body : length/width/height/wheelbase â cm (in) : 457/178/127/255 (179.9/70.1/100.4); weight : 1520 kg (3355 lbs).
Engine : V12 4390 cc (268 cid), front-mounted, 24 valves, 5-speed, manual, rear-wheel drive. Power : 340 hp@ 6800 rpm; torque : 423 Nm at 4000 rpm. Top speed : 260 km/h (162 mph).