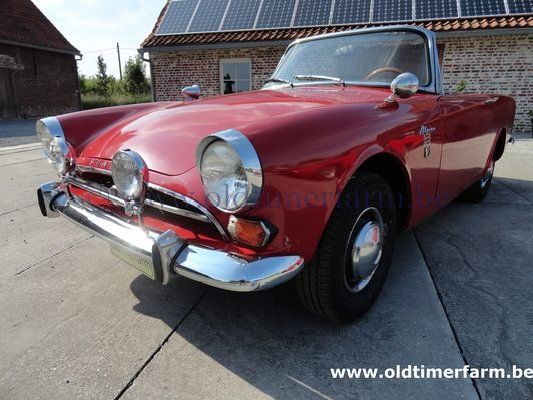 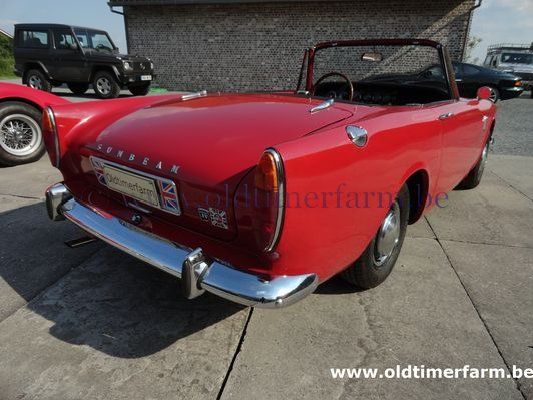 (from Wikipedia, the free encyclopedia) The Sunbeam Alpine is a sporty two-seat open car from Rootes Group's Sunbeam car marque. The original was launched in 1953 as the first vehicle from Sunbeam-Talbot to bear the Sunbeam name alone since the 1935 takeover of Sunbeam and Talbot by the Rootes Group.
The Alpine was derived from the Sunbeam-Talbot 90 Saloon and has since become colloquially known as the "Talbot" Alpine. It was a two-seater sports roadster initially developed by Sunbeam-Talbot dealer George Hartwell in Bournemouth, as a one-off rally car. It had its beginnings as a 1952 Sunbeam-Talbot drophead coupé, and was supposedly named by Norman Garrad of the works Competition Department, who was heavily involved in the Sunbeam-Talbot successes in the Alpine Rally in the early 1950s using the saloon models.
The car has a four-cylinder 2267 cc engine from the saloon, but with a raised compression ratio. However, since it was developed from the saloon platform, it suffered from rigidity compromises despite extra side members in the chassis. The gearbox ratios were changed, and from 1954 an overdrive unit became standard. The gearchange lever was column-mounted. The Alpine Mark I and Mark III (no Mark II was made) were hand-built  like the 90 drophead coupé  at Thrupp & Maberly coachbuilders from 1953 to 1955, remaining in production for only two years with 1,582 automobiles produced. The majority of production, 961, were exported to the USA & Canada, 445 stayed in the UK and 175 went to other world markets. It has been estimated that perhaps as few as 200 have survived.
In the 1953 Alpine Rally four Alpines won the Coupe des Alpes, one of which, finishing 6th, was driven by Stirling Moss; Sheila van Damm won the Coupe Des Dames in the same rally. Very few of these cars are ever seen on the big screen. However, a sapphire blue Alpine featured prominently in the 1955 Alfred Hitchcock film To Catch a Thief starring Cary Grant and Grace Kelly. More recently, the American PBS show History Detectives tried to verify that an Alpine roadster owned by a private individual was the actual car used in that movie. Although the Technicolor process could "hide" the car's true colour, and knowing that the car was shipped back from Monaco to the USA for use in front of a rear projection effect, the car shown on the programme was ultimately proven not to be the film car upon comparison of the vehicle identification numbers.
Kenneth Howes and Jeff Crompton were tasked with doing a complete redesign in 1956, with the goal of producing a dedicated sports car aimed principally at the US market. Ken Howes contributed some 80% of the overall design work, which bears more than incidental resemblance to the early Ford Thunderbird[citation needed]; Howe had worked at Ford before joining Rootes.
The Alpine was produced in four subsequent revisions through to 1968. Total production numbered around 70,000. production stopped shortly after the Chrysler take over of the Rootes Group.
Series I 19591960
The "Series" Alpine started production in 1959. One of the original prototypes still survives and was raced by British Touring car champion Bernard Unett.
The car made extensive use of components from other Rootes Group vehicles and was built on a modified floorpan from the Hillman Husky estate car. The running gear came mainly from the Sunbeam Rapier, but with front disc brakes replacing the saloon car's drums. An overdrive unit and wire wheels were optional. The suspension was independent at the front using coil springs and at the rear had a live axle and semi elliptic springing. The Girling-manufactured brakes used 9.5 in (241 mm) disc at the front and 9 in (229 mm)drums at the rear.
Coupe versions of the post-1959 version were built by Thomas Harrington Ltd. Until 1962 the car was assembled for Rootes by Armstrong Siddeley.
An open car with overdrive was tested by the British magazine The Motor in 1959. It had a top speed of 99.5 mph (160.1 km/h) and could accelerate from 060 mph (97 km/h) in 13.6 seconds. A fuel consumption of 31.4 miles per imperial gallon (9.00 L/100 km; 26.1 mpg-US) was recorded. The test car cost £1,031 including taxes. 11,904 examples of the series I were produced.
Series II 19601963
The Series II of 1960 featured an enlarged 1592 cc engine producing 80 bhp and revised rear suspension but there were few other changes. When it was replaced in 1963, 19,956 had been made. A Series II with hardtop and overdrive was tested by The Motor magazine in 1960, which recorded a top speed of 98.6 mph (158.7 km/h), acceleration from 060 mph (97 km/h) in 13.6 seconds and a fuel consumption of 31.0 miles per imperial gallon (9.11 L/100 km; 25.8 mpg-US). The test car cost £1,110 including taxes.
Series III 19631964
The Series III was produced in open and removable hardtop versions. On the hardtop version the top could be removed but no soft-top was provided as the area it would have been folded into was occupied by a small rear seat. Also, the 1592 cc engine developed less power. To provide more room in the boot, twin fuel tanks in the rear wings were fitted. Quarter light were fitted to the windows. Between 1963 and 1964 5863 were made.
Series IV 19641965
The lower-output engine option was now dropped with convertible and hardtop versions sharing the 82 bhp engine with single Solex carburettor. A new rear styling was introduced with the fins largely removed. Automatic transmission with floor mounted control became an option but was not popular. From Autumn 1964 a new manual gearbox with synchromesh on first gear was adopted in line with its use in other Rootes cars. 12,406 were made.
Series V 19651968
The final version had a new five-bearing 1725 cc engine with twin Zenith-Stromberg semi-downdraught carburettors producing 93 bhp. There was no longer an automatic transmission option. 19,122 were made.
Competition
The Alpine enjoyed relative success in European and North American competition. Probably the most notable international success was at Le Mans, where a Sunbeam Harrington won the Thermal Index of Efficiency in 1961.
Specifications.
Bodywork. Length/width/height/wheelbase  cm (in) : 394/154/131/218 (155.2/60.5/51.5/86); weight : 1000 kg (2207 lb).
Engine. Straight four 1592 cc (97 ci), front-mounted, 8 valves, 2 Zenith carburettors, manual 4 speed gearbox, rear-wheel drive. Maximum power : 80 bhp at 5000 rpm; torque : 126 Nm at 3500 rpm. Top speed : 150 km/h (92 mph).