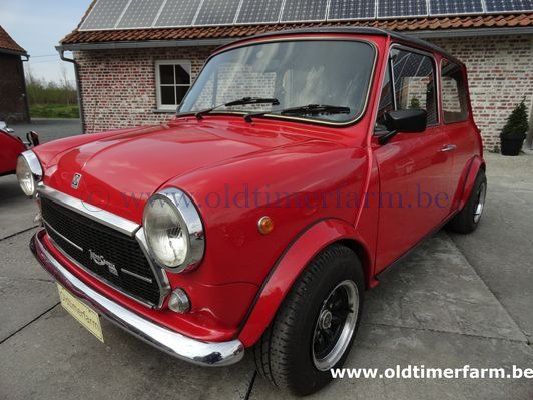 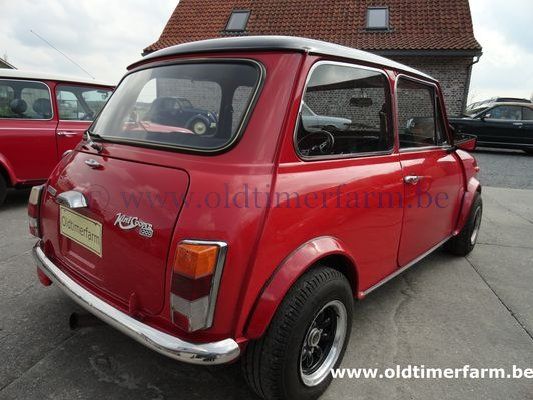 (from Wikipedia, the free encyclopedia)  Innocenti was an Italian machinery works originally established by Ferdinando Innocenti in 1920. Over the years they produced the famous Lambretta scooters as well as a range of automobiles, mainly of British origins. The brand was retired in 1996, six years after a takeover by Fiat.
After World War II, the company was famous for many years for Lambretta scooters models such as LI125, LI150, TV175, TV200, SX125, SX150, SX200, GP125, GP150 and GP200.
From 1961 to 1976 Innocenti built under licence the BMC (later the British Leyland Motor Corporation (BLMC)) Mini, with 998 cc and 1275 cc engines, following with other models, including the Regent (Allegro), with engines up to 1485 cc. The company of this era is commonly called Leyland Innocenti. The Innocenti Spyder (19611970) was a rebodied version of the Austin-Healey MKII Sprite (styling by Ghia). The car was produced by OSI (near Milan). In 1972 BLMC took over control of the company.
In 1972 the company's land, buildings and equipment were purchased by British Leyland in a deal involving approximately £3 Million. The British company had high hopes for its newly acquired subsidiary at a time when, they reported to the UK press, Italian Innocenti sales were second only to those of Fiat, and ahead of Volkswagen and Renault : there was talk of further increasing annual production from 56,452 in 1971 to 100,000. However, the peak production under BLMC was 62,834 in 1972, in spite of exports increasing from one (1) car in 1971 to over 17,000 in 1974. Demonstrating their ambitions, the British company installed as Managing Director one of their youngest UK based senior executives, "32 year old" former Financial Controller Geoffrey Robinson. Three years later BLMC ran out of money and was nationalised by the UK government.
In 1975, the company passed to Alejandro de Tomaso and was reorganised by the De Tomaso Group under the name Nuova Innocenti. However, with the loss of the original Mini, the Austin I5, and the (admittedly slow-selling) Regent, sales were in freefall. Production was nearly halved in 1975 and were down to about a fifth of the 1974 levels in 1976. After this crisis, however, the new Bertone-bodied Mini began selling more strongly and production climbed to a steady 40,000 per annum by the end of the seventies. The first model had Bertone-designed five-seater bodywork and was available with Leyland's 998 cc and 1,275 cc engines.
Exports, which had been carried out mainly by British Leyland's local concessionaires, began drying up in the early eighties as BL did not want to see internal competition from the Innocenti Mini. Sales to France (Innocenti's biggest export market) ended in 1980, with German sales coming to a halt in 1982. Around the same time, the engine deal with Leyland ended - with production soon dropping into the low twenty thousands. Later models, from model year 1983 on, used 993 cc engines made by Daihatsu of Japan.
In addition to building their own cars, De Tomaso also had Innocenti use their factory capacity in producing bodywork for and providing final assembly of the Maserati Biturbo, Quattroporte, and the Chrysler TC by Maserati. As production kept decreasing, and prices vis-à-vis competing Fiat products increased, Innocenti attempted to stay relevant by adding ever higher and more individual equipment. Innocenti kept building their own cars until 1992. Beginning in 1990, when Fiat took over, Innocenti also sold Brazilian-imported versions of the Fiat Uno (Elba station wagon and Uno Mille) for the Italian market. The marque ended when sales of these rebadged models came to a halt in 1996
Specifications. Body. Length/width/height/wheelbase  cm (in) : 305/144/135/204 (120.2/56.7/53.3/80.1); weight : 735 kg (1622 lb).
Engine : transverse front 1275 cc 4-cylinders, 8 valves, 2 SU carbs., manual 4-speed gearbox, front-wheel drive. Maximum power : 63 bhp @ 5700 rpm, maximum torque : 94 Nm @ 3900 rpm. Top speed : 160 km/h (100 mph); 0-60 mph in 8.9 sec.