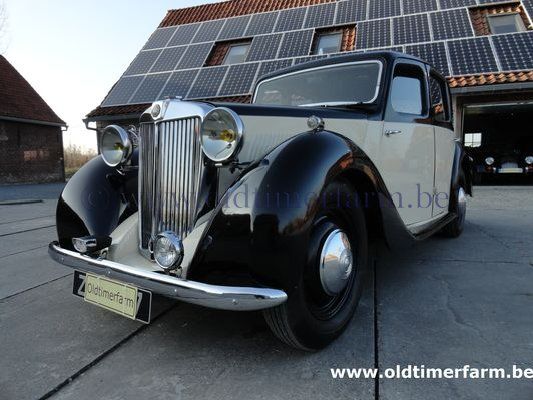 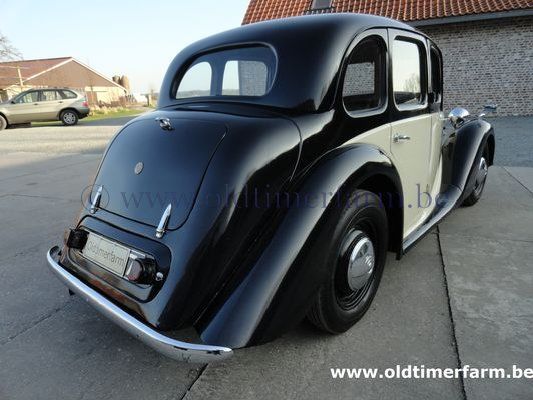 The MG Y-Type was a small saloon and limited production open four-seat tourer built by the MG Car Company between 1947 and 1953.
When production ceased in 1953 8,336 Y Types had been produced, the breakdown being: 6,151 YAs, 1,301 YBs and 877 YT Tourers.
In the years immediately before the Second World War, MG had sought to supplement its popular range of Midget sports cars with three saloons of various sizes and engine capacities. These were the S, V and W models. The MG factory at Abingdon on Thames had grown by developing what were in essence Morris based products and they were always to be closely associated with what was to become the Nuffield Organisation (Morris, Wolseley and later Riley). The WA had an engine displacement of 2,561 cc, the SA 2,288 cc and the smallest of the group, the VA, had an engine of 1,548 cc. The next development to the range was to include one more saloon, of smaller engine capacity than the VA, and for a component base the Cowley design office turned to Morriss Ten-Four Series M saloon, which was introduced during 1938, and the smaller Eight Series E which was launched at the Earls Court Motor show the same year.
The prototype Y Type was constructed in 1939 with an intended launch at the Earls Court Motor show, the following year. However, as a result of the hostilities the public had to wait a further eight years before production commenced. All prototypes originating from the MG Factory at Abingdon were allocated numbers prefixed by the letters EX; this practice continued until the mid-fifties. Although the prototype of the MG Y Type was primarily a Morris concept from Cowley, much of the fleshing out was completed at Abingdon. As a result it was allocated the prototype number EX.166.
When the car was launched the MG Sales Literature stated A brilliant new Member of the famous MG breed. This new One and a Quarter Litre car perpetuates the outstanding characteristics of its successful predecessors  virile acceleration, remarkable road manner, instant response to controls, and superb braking. A lively car, the new One and a Quarter Litre provides higher standards of performance. The UK price of the car was £525.0.0 ex works plus purchase tax of £146.11.8d.
Gerald Palmer was responsible for body styling and, in essence he took a Morris Eight Series E four-door bodyshell in pressed steel, added a swept tail and rear wings, and also a front-end MG identity in the shape of their well-known upright grille. The MG 1 1/4 Litre Saloon would retain the traditional feature of separately mounted headlights at a time when Morris was integrating headlamps into the front wing and it was also to have a separate chassis under this pressed-steel bodywork, even though the trend in the industry was towards unitary construction.
The car featured an independent front suspension layout designed by Gerald Palmer and Jack Daniels (an MG draughtsman). Independent front suspension was very much the latest technology at the time and the Y Type became the first Nuffield product and one of the first British production cars with this feature. The separate chassis facilitated the Jackall System, which consisted of four hydraulically activated rams that were bolted to the chassis, two at the front and two at the rear. The jacks were connected to a Jackall Pump on the bulkhead that enabled the front, the back, or the entire car to be raised to facilitate a wheel change.
The power unit was a single carburettor version of the 1,250 cc engine used in the latest MG-TB. This engine, the XPAG, went on to power both the MG-TC and MG-TD series. The MG Y Type saloon developed 46 bhp at 4,800 rpm, with 58.5 lb ft of torque at 2,400 rpm, the YT Tourer (with the higher lift camshaft and twin carburettors) develop 54 bhp (40 kW). With the exception of only the Rover Ten, which managed 2 additional bhp, the Y Type had more power than other British saloons of similar size. Indeed at the time many manufacturers were still producing side valve engines.
The MG Y Type had an extremely high standard of interior furnishing and finish, in accordance with the best British traditions. The facing surfaces of all seats were leather, as were the door pockets. The rear of the front seats were made from Rexine, a form of leathercloth, which matched the leather fronts, as were the door panels themselves. A roller blind was fitted to the rear window as an anti-glare mechanism (not a privacy screen as many think).
Considerable use of wood was made in the internal trim of the Y Type. Door windows, front and rear screens were framed in burl walnut, the instrument panel set in bookmatched veneer offsetting the passenger side glove box.
The speedometer, clock, and three-gauge cluster of oil pressure, fuel and ammeter, were set behind octagonal chrome frames, a subtle iteration of the MG badge theme later replicated in the MG TF.
Specifications.
Bodywork. Length/width/height/heelbase  cm (in) : 409/148/147/251 (161/58.3/58/99); weight : 1060 kg (2339 lb).
Engine. Inline 4 cylinders, front-mounted, 8 valves, 1 Solex Carburettor, manual 4-speed gearbox, rear-wheel drive. Maximum power : 46 bhp @ 4800 rpm; torque : 79 Nm@ 2400 rpm. Top speed : 114vkm/h (71 mph).