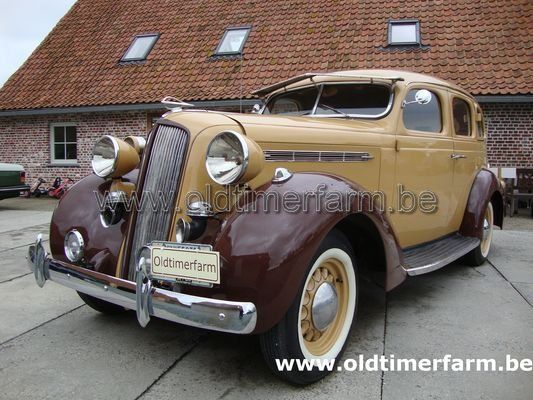 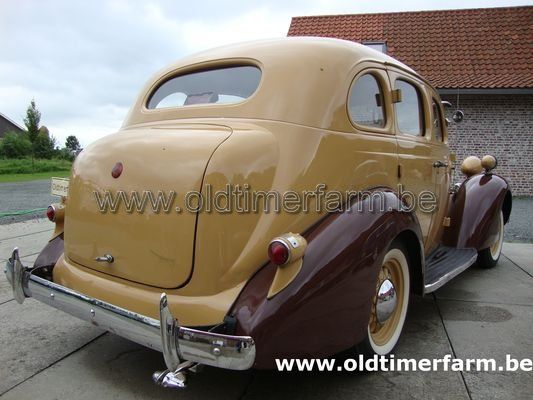 The Studebaker President was the premier automobile model manufactured by the Studebaker Corporation of South Bend, Indiana (USA) from 1926-1942. The nameplate was reintroduced in 1955 and used until the end of the 1958 model when the name was retired.
Prior to mid-1926, Studebakers premium model was the Studebaker Big Six. The first automobile bearing the name President was unveiled on July 23, 1926, designated as the ES model in internal Studebaker memos.[1] It was powered by a 354 cu in (5,800 cc) six-cylinder engine until the appearance in January 1928 of the smaller and smoother straight-eight engine of 312.5 cu in (5,121 cc).[2] Albert Russel Erskine, Studebakers president, spared no expense in his goal of making the President the finest automobile on the American road. Presidents produced from 1928-1933 established land speed records, some of which went unbroken for 35 years.
The primary advance of the 1931 engine was that the crankshaft was drilled for oil passage to each of its nine large main bearings. At this time, the straight-eight engines of many other firms had only five bearings; connecting the crank throws of every pair of cylinders between said bearings, their crankshafts had a heavy diagonal beam to take the stress, and the lubrication of the bearings was not as effective. Other advances for performance were that the valves had spring dampers and the muffler was a straight-through type. With these improvements the engine achieved 122 hp (91 kW). It also had modern filters for air, oil, and fuel, an improved thermostat, and a Lanchester vibration damper.
In 1931, Studebaker introduced "Ovaloid" headlights which were oblong in shape and made identification of the President and other "senior" Studebaker models easier. Presidents manufactured in this era were considered to rival more expensive marques such as Cadillac, Packard and Chryslers Imperial model range. Studebaker went into receivership during 1933-34, Albert Erskine committed suicide, and the era of the big, impressive President came to an abrupt end.
For 1934, Studebaker trimmed its model lineup and streamlined its vehicles. The company designed a new body, the Land Cruiser, which was offered on the Dictator, Commander and President. The Land Cruiser models were easily identified by their extreme streamlining features, unusual 4-piece rear window, trunk and the full fender skirts on the rear of the vehicle. The new Presidents were smaller and less impressive than their predecessors, though still fine automobiles.
For 1935, Presidents and Commanders offered an optional steel sliding roof similar to sunroofs common on vehicles today. In 1936, all Studebaker cars featured the "Planar" suspension system, and offered the "Startix" automatic engine-starting system as an optional accessory. Vehicles manufactured from 1936 also showed the influence of industrial designer Raymond Loewy, who was hired as Studebakers design consultant, and Helen Dryden who specialised in interior styling.[4] Studebaker made its Hill-Holder device (an anti-rollback brake system) standard on the President in that year.
In 1938, the company offered a remote-controlled "Miracle-Shift" transmission which featured a dashboard-mounted shifter. The unit was discontinued in 1939 when the transmission shift lever was moved to the steering column.  For 1941, the President received a new body style, a four-door sedan with rear-opening rear doors, as opposed to the then-conventional front-opening (suicide) rear doors. This vehicle was designated the Skyway President, recognizable by its concealed running-boards and lack of rear quarter-windows. This style continued for the shortened 1942 model, after which the President was discontinued.
Studebaker reintroduced the President nameplate in 1955 when it was applied to all premium-trimmed vehicles. The most noteworthy of these later Presidents was the 1955 Studebaker Speedster. The name was discontinued after the 1958 model year, when Studebaker began focusing on the compact Studebaker Lark.