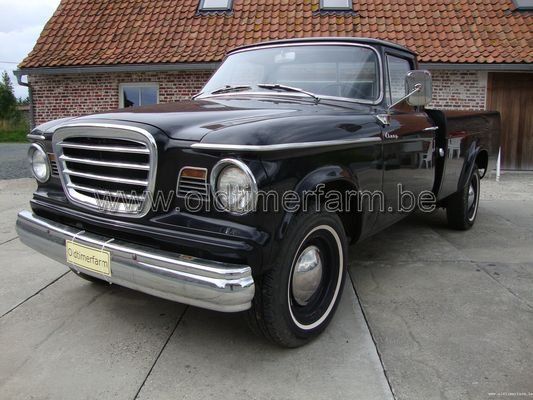 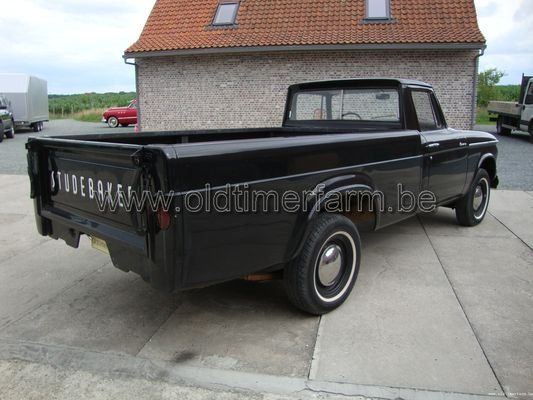 Studebaker Corporation was a United States wagon and automobile manufacturer based in South Bend, Indiana. Founded in 1852 and incorporated in 1868 under the name of the Studebaker Brothers Manufacturing Company, the company was originally a producer of wagons for farmers, miners, and the military. Studebaker entered the automotive business in 1902 with electric vehicles and in 1904 with gasoline vehicles, all sold under the name "Studebaker Automobile Company". Until 1911, its automotive division operated in partnership with the E-M-F Company and the Garford Company of Elyria, Ohio. The first gasoline cars to be fully manufactured by Studebaker were marketed in August 1912.
Over the next 50 years, the company established an enviable reputation for quality and reliability. The South Bend plant ceased production on December 20, 1963, and the last Studebaker car rolled off the Hamilton, Ontario, Canada, assembly line on March 16, 1966.
The Studebaker Champ was a light-duty pickup truck produced by the Studebaker Corporation from 1960-1964.
Designed at a time when Studebaker's truck line hadn't seen major upgrading in over 10 years, the company, which had endured years of declining sales, was forced to use a number of existing components, but the result was impressive.
The chassis and cargo box of the Champ were basically the same as what had been used for Studebaker's ½ and ¾-ton trucks since 1949, but the cab section was very different.
An entirely new cab was out of the question because of cost considerations, but the new Lark compact car's body proved to be just the right size and shape to suit the purpose. The engineering staff took a four-door sedan, cut it in half behind the front doors and modified the front half slightly to fit the truck chassis. The only new sheetmetal stamping that was required was the back wall of the new cab. Minor modifications for mounting of the cab to the 1949-vintage truck frame were also made.    The Lark's front end sheetmetal was retained as well, but funds were allocated to give the Champ a new horizontal-bar grille that delivered a "tougher" look.  Given the cobbled-up nature of the truck, sales were fairly good for the 1960 model year "5E" series. Unfortunately, it was all downhill from there.  1961's 6E series saw the addition of a full-width cargo box, the Spaceside, for which Studebaker had purchased the tooling from Dodge. It didn't help sales, however, nor did the problems which developed early on with the redesigned six-cylinder engine.
Few changes were made to the Champ in 1962 (7E series) or 1963 (8E series), and the few 1964 models built actually continued the 8E series started for the '63 models. The only new feature introduced for the 8E trucks was air conditioning.  By December 1963, Studebaker's board of directors announced the closure of its South Bend, Indiana factory, and the trucks were among the casualties of the company's consolidation around an abbreviated family-car lineup in its Hamilton, Ontario, Canada assembly plant.
When they purchased the rights and tooling to the Studebaker Avanti in 1964, Nate Altman and Leo Newman also acquired the rights and tooling to Studebaker's trucks. However, Altman and Newman, for reasons which are lost to history, never built as much as a single truck, and Kaiser Jeep Corporation took over Studebaker's former Chippewa Avenue truck plant in South Bend for military production in late 1964.  The Champ is seldom given credit for introducing a feature that is nearly universal among today's pickup trucks: the sliding rear window, which was available from the start, proved to be quite popular among Champ buyers. It was truly one of Studebaker's better ideas, and caught on later among the major truck makers.  With a cab based on a sedan body, the Champ was among the first pickups to offer true "car-like" comfort, with a wide, comfortable bench seat and a handsomely-styled interior. Other manufacturers took until the late 1960s and early 1970s to follow the Champ's lead.
Finally, the last Champs of 1963-64 were among the first American trucks  if not the first  to offer service bodies constructed of fiberglass. Today, such bodies made of fiberglass and composites are still gaining acceptance, with the steel service body remaining the mainstay.
While it didn't prove to be the savior of the Studebaker truck line, the Champ also pointed the way to a more rationally-sized yet still rugged pickup, something Dodge later claimed as a "first" with their mid-sized Dakota, which was introduced as a 1987 model, nearly 27 years after the Champ.
Today, the Champs that still exist are highly prized for their interesting combination of passenger-car comfort and style and their rugged mechanical durability (the sixes' head problems notwithstanding). About the only major failing of the Champ is shared with many Studebaker models: rust. Champs tend to rust most severely in the cab floor and front fenders. If left unchecked, it can be extensive and very costly to repair, if it is repairable at all.