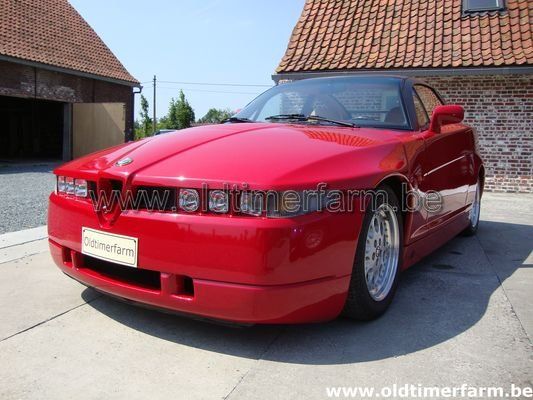 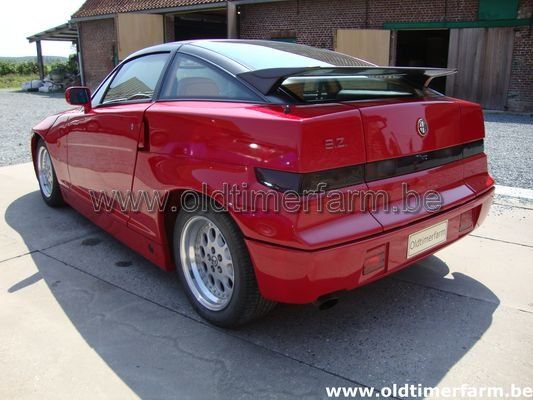 (from Wikipedia, the free encyclopedia) The Alfa Romeo SZ (Sprint Zagato) or ES-30 (Experimental Sportscar 3.0 litre) is a high-performance limited-production sports car/road-concept car built between 1989 and 1991 with partnership via Centro Stile Zagato, Centro Stile Alfa Romeo and Centro Stile Fiat. It was unveiled as ES-30 in 1989 Geneva Motor Show as a prototype by Zagato, although the car was mainly built by them - not designed mechanically.
Robert Opron of the Fiat design studio was responsible for the initial sketches while Antonio Castellana was largely responsible for the final styling details and interior. Only the 'Z' logo of Zagato was kept. The car possessed unusual headlights positioned in a trio on each side - a styling used more subtly on later Alfa Romeos in the 2000s.
Mechanically and engine-wise, the car was based on the Alfa Romeo 75, production being carried out by Zagato at Terrazzano di Rho near the Alfa factory in Arese. The thermoplastic injection moulded composite body panels were produced by Italian company Carplast and French company Stratime Cappelo Systems.
The suspension was taken from the Alfa 75 group A/IMSA car,[2] and modified by Giorgio Pianta, engineer and team manager of the Lancia and Fiat rally works team. A hydraulic damper system was made by Koni. The SZ was originally equipped with Pirelli P Zero tyres (front 205/55 ZR 16, rear 225/50 ZR 16) and is able to sustain over 1.1 G in cornering, some drivers have measured a cornering force of 1.4 G, which remains an excellent performance figure.  The two-seater hard roof version also saw a convertible version, the RZ (for Roadster Zagato), produced from 1992 until December 1994.[citation needed]
Specifications. Body : length/width/height/wheelbase – cm (in) : 406/173/131/251 (159.8/68.1/51.6/98.8); weight : 1260 kg (2781 lb).
Engine. Front V6 2959 cc (181 ci), injection, 5-speed manual gearbox, rear-wheel drive. Maximum power : 210 bhp  6200 rpm, torque : 245 Nm  4500 rpm. Top speed : 245 km/h (152 mph); 0-60 in 6.8 sec.