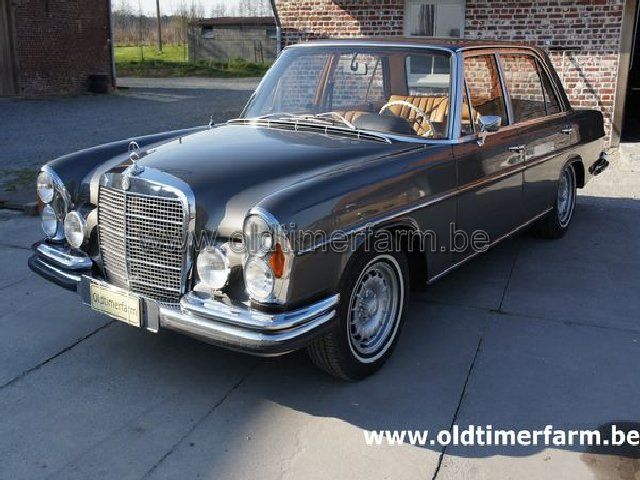 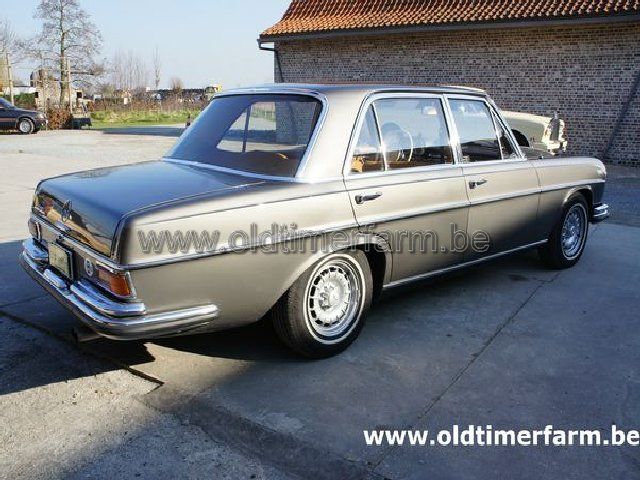 Belgian car
(from Wikipedia, the free encyclopedia)The Mercedes-Benz W108 and W109 were luxury cars built by Mercedes-Benz from 1965 through 1972. The line was an update of the predecessor W111 and W112 fintail sedans.
The car's predecessor, the Mercedes-Benz W111 (produced 1959-1965) helped Daimler develop greater sales and achieve economy of scale production. Whereas in the 1950s, Mercedes-Benz was producing hand-assembled 300s and 300SLs along with conveyor assembled Pontons (190, 190SL and 220) etc., the fintail (German: Heckflosse) family united the entire Mercedes-Benz range of vehicles onto one automobile platform, reducing production time and costs. However, the design fashion of the early 1960s changed. For example, the fintails, originally borrowed from North American vehicles of the late 1950s, died out within a few years as a fashion accessory. By the time the 2-door coupe and cabriolet W111s were launched, the fins lost their chrome trim and sharp appearance, the arrival of the W113 Pagoda in 1963 saw them further buried into the trunk's contour, and finally disappeared on the W100 600 in 1964.
The upgrade of the W111 began under the leadership of designer Paul Bracq. Although the fins' departure was the most visible change, the W108 compared to the W111 had a lower body waist line that increased the window area, (the windscreen was 17 percent larger than W111). The cars had a lower ride (a decrease by 60 mm) and wider doors (+15 mm). The result was a visibly new car with a more sleek appearance and an open and spacious interior.
The suspension system featured a reinforced rear axle with hydro-pneumatic compensating spring. The car sat on larger wheels (14) and had disc brakes on front and rear. The W109 was identical to the W108, but featured an extended wheelbase of 115 mm and self-levelling air suspension. This was seen as a successor to the W112 300SEL that was originally intended as an interim car between the 300 Adenauer(W189) and the 600 (W100) limousines. However, its success as "premium flagship" convinced Daimler to add a LWB car to the model range. From that moment on, all future S-class models would feature a LWB line.
Although the W108 succeeded the W111 as a premium range full-size car, it did not replace it. Production of the W111 continued, however the 230S was now downgraded to the mid-range series, the Mercedes-Benz W110, and marketed as a flagship of that family until their production ceased in 1968.