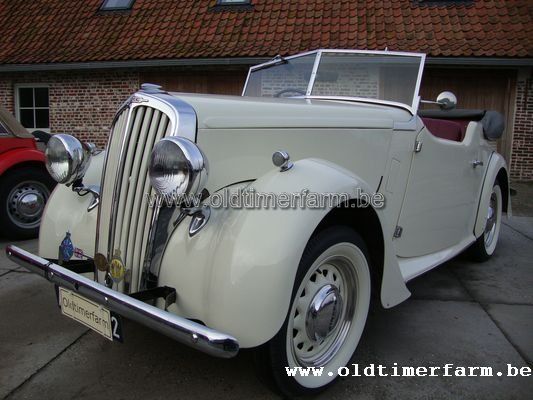 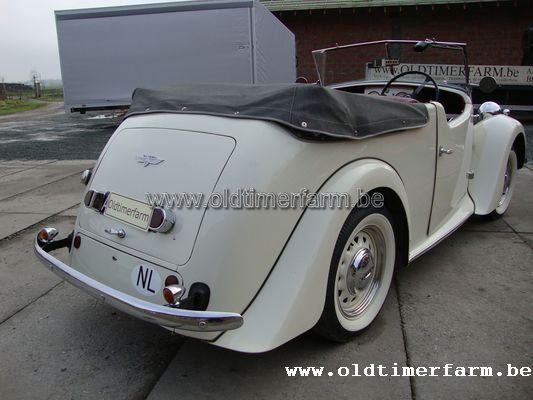 Singer was an automobile company founded in 1905 in Coventry, England. It was acquired by the Rootes Group of the United Kingdom in 1956, who continued the brand until 1970. The British Singer company had no connection with the Singer company of Mount Vernon, New York, USA, which made luxury cars from 1915 to 1920.
Also bicycle maker, Singer made first four wheel car in 1905. It was made under licence from Lea-Francis and had a 3 cylinder 1400 cc engine. The first Singer designed car was the 4 cylinder 2.4 litre 12/14 of 1906. The engine was bought in from Aster. For 1907 the Lea-Francis design was dropped and a range of two, three and four cylinder models using White and Poppe engines launched. The Aster engined models were dropped in 1909 and a new range of larger cars introduced. All cars were now White and Poppe powered. In 1911 the first big seller appeared with the 1100cc Ten with Singer's own engine. The use of their own power plants spread through the range until by the outbreak of the World War I all models except the low-volume 3.3 litre 20 hp were so equipped. The Ten continued after World War I, with a redesign in 1923 including a new overhead valve engine. Six cylinder models were introduced in 1922. In 1927 the Ten engine grew to 1300 cc and a new light car the 850 cc overhead cam (ohc) engine, the big selling Junior was announced. By 1928 Singer was Britain's third largest car maker after Austin and Morris. The range continued in a very complex manner using developments of the ohc Junior engine first with the Nine (two bearing crank), the 14/6 and the sporty 1 1/2 litre in 1933. The Nine became the Bantam in 1935. Externally the Bantam was very similar to the Morris Eight, had a three-bearing crankshaft and it was the first Singer to be fitted with a synchromesh gearbox, albeit with only three forward gears.
After World War II the pre war Nine, Ten and Twelve were initially re-introduced with little change. In 1948 the SM1500 with independent front suspension and a separate chassis was announced, still using the SOHC 1500cc engine. It was, however, expensive at £799, and failed to sell well as Singer's rivals also got back into full production. The car was restyled to become the Hunter in 1954. The Hunter was available with an HRG-designed (q.v.) twin overhead cam version of the engine, but few were made.
By 1956 the company was in financial difficulties and Rootes Brothers who had handled Singer sales since before World War 1 bought the company. The Singer brand was absorbed into the Rootes Group whose brands largely sold badge engineered versions of each others cars. The next Singer car, the Gazelle, was a Hillman Minx variant which retained the pre-war design Singer ohc engine for the I and II versions but this too went in 1958 with the IIA given a push-rod engine. The Vogue which ran alongside the Gazelle from 1961 was a rebadged Hillman Super Minx with more luxurious trim.
Specifications. Body : length/width/height/wheelbase – cm (in) : 396/146/±130/251 (156/57.5/±52/95); weight : 965 kg (2127 lb).
Engine : 4 cylinders in line 1193 cc (72.8 cu in), 1 SU carb, manual 3-speed, rear-wheel drive. Maximum power : 37 bhp @ 4800 rpm. Top speed : 105 km/h (64 mph)