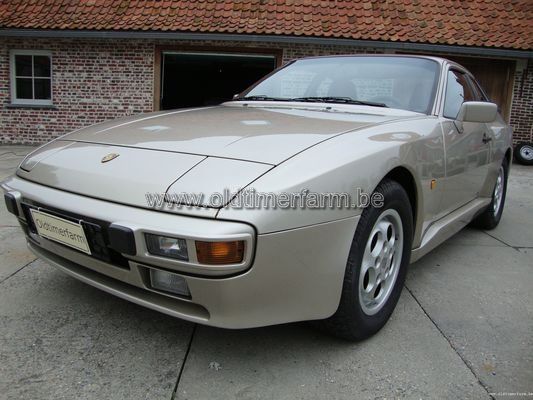 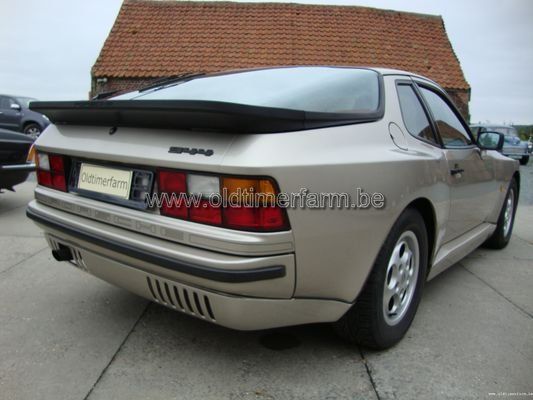 0032 472 40 13 38
MAIL US
VISIT US
FIND US AT EVENTS
Make Porsche
Model 944 2.7 Targa
Type coupe
Construction year 1989
KM 170600
Cilinder displacement 2700
Gears manual
Steering left hand drive
.from Wikipedia, the free encyclopedia)
The Porsche 924 had originally been a project of VW-Porsche a joint Porsche/Volkswagen company created to develop and produce the 914 which was sold in Europe as both a Porsche and a Volkswagen. In 1972 a replacement for the Volkswagen version of the 914, code named EA-425 began development. The model was to be sold as an Audi as part of the VW-Audi-Porsche marketing arrangement. Although testing had begun in the Spring of 1974 Volkswagen decided to cancel the program due to the expense of production as well as the feeling that the recently released Volkswagen Scirocco would fill the sports coupe sufficiently. At the time Porsche was considering introducing their own water cooled front engine 2+2 coupe to replace the 912E and their model of 914 and Volkswagen's cancellation provided an opportunity. Porsche purchased the design and finished developmental. The vehicle drove and handled exceptionally well and received positive reviews, but was criticized for the Audi-sourced 2 litre engine; Porsche introduced a Turbocharged 924 to increase performance, but the price was considered too high for the time, which hampered sales. Rather than scrap the design , Porsche decided to develop the 924, as they had with generations of the 911; although model numbers would change, the 924 would provide the basis for its replacement.
Porsche re-worked the platform and abandoned the Audi engine, installing in its place a new all-alloy 2.5 litre straight-4 engine that was, in essence, half of the 928's 5.0 litre V8, although very few parts were actually interchangeable. Not a natural choice for a luxury sports car, a four cylinder engine was chosen for fuel efficiency and size, because it had to be fitted from below on the Neckarsulm production line. To overcome the unbalanced secondary forces that make other four cylinder engines feel harsh, Porsche included two counter rotating balance shafts running at twice engine speed. Invented in 1904 by British engineer Frederick Lanchester, and further developed and patented in 1975 by Mitsubishi Motors, balance shafts carry eccentric weights which produce inertial forces that balance out the unbalanced secondary forces, making a four cylinder engine feel as smooth as a six cylinder.[citation needed] The engine was factory-rated at 150 bhp (112 kW; 152 PS) in its U.S. configuration. Revised bodywork with wider wheel arches, similar to that of the 924 Carrera GT, a fresh interior and upgrades to the braking and suspension systems rounded out the major changes. Porsche introduced the 944 for MY 1982 to great anticipation. In addition to being slightly faster (despite having a poorer drag co-efficient than the 924), the 944 was better equipped and more refined than the 924, it had better handling and stopping power and was more comfortable to drive. The factory-claimed 0-60 mph time of over 9 seconds (8.3 seconds according to "Porsche the Ultimate Guide" By Scott Faragher) was actually rather modest. The factory-claimed top speed of 130 mph (210 km/h) was also pessimistic, Autocar having verified a top speed of 137 mph (220 km/h). The car had nearly even front to rear weight distribution (50.7%front/49.3%rear) thanks to the rear transaxle balancing out the engine in the front. This gave it very balanced, predictable handling at the limits of adhesion.
In mid-1985 the 944 underwent its first significant changes. These included :- a new dash and door panels, embedded radio antenna, upgraded alternator (from 90 amp to 115 amp), increased oil sump capacity, new front and rear cast alloy control arms and semi-trailing arms, larger fuel tank, optional heated and powered seats, Porsche HiFi sound system, and revisions in the mounting of the transaxle to reduce noise and vibration. The "cookie cutter" style wheels used in the early 944s were upgraded to new "phone dial" style wheels. 1985 model year cars incorporating these changes are sometimes referred to as "1985B", "85.5" or "1985 1/2" cars.
In early 1989 before the release of the 944S2, Porsche upgraded the 944 from the 2.5 liter engine to a 2.7 liter engine with a rated 163 hp (versus 153 for the 1988 2.5 liter engine) and a significant increase in torque. In addition to the increase in displacement, the new motor featured a closed deck block design and a different cylinder head which incorporated larger valves.
Characteristics. Body : length/width/height/wheelbase – m (in) : 429/174/128/240 (168.9/68.3/50.2/94.5); weight : 1400 kg (3090 lbs).
Engine : 4-cylinders 2681 cc, injection, front-mounted; 5-speed, manual, rear-wheel drive; power : 165 bhp @5800 rpm. Top speed : + 220 km/h (140 mph)
Read more