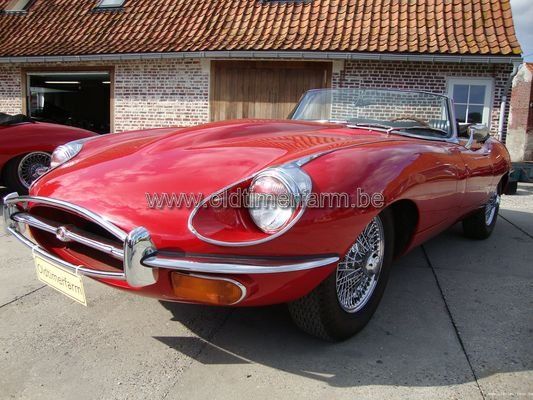 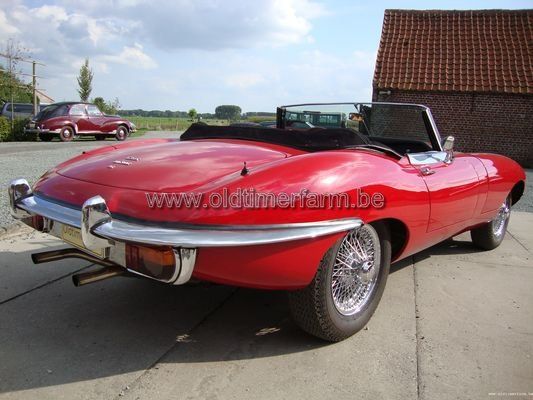 (From Wikipedia, the free enctclopedia). The E-Type was initially designed and shown to the public as a grand tourer in two-seater coupé form (FHC or Fixed Head Coupé) and as convertible (OTS or Open Two Seater). The 2+2 version with a lengthened wheelbase was released several years later.  On its release Enzo Ferrari called it "The most beautiful car ever made". The model was made in three distinct versions which are now generally referred to as "Series 1", "Series 2" and "Series 3". A transitional series between Series 1 and Series 2 is known unofficially as "Series 1½". In addition, several limited-edition variants were produced: The "'Lightweight' E-Type" which was apparently intended as a sort of follow-up to the D-Type. Jaguar planned to produce 18 units but ultimately only a dozen were reportedly built. Of those, one is known to have been destroyed and two others have been converted to coupé form. These are exceedingly rare and sought after by collectors.
The "Low Drag Coupé" was a one-off technical exercise which was ultimately sold to a Jaguar racing driver. It is presently believed to be part of the private collection of the current Viscount Cowdray.
The Series 1 was introduced, initially for export only, in March 1961. The domestic market launch came four months later in July 1961. The cars at this time used the triple SU carburetted 3.8 litre 6-cylinder Jaguar XK6 engine from the XK150S. The first 500 cars built had flat floors and external hood (bonnet) latches. These cars are rare and more valuable. After that, the floors were dished to provide more leg room and the twin hood latches moved to inside the car. The 3.8 litre engine was increased to 4.2 litres in October 1964.
All E-Types featured independent coil spring rear suspension with torsion bar front ends, and four wheel disc brakes, in-board at the rear, all were power-assisted. Jaguar was one of the first auto manufacturers to equip cars with disc brakes as standard from the XK150 in 1958. The Series 1 can be recognised by glass covered headlights (up to 1967), small "mouth" opening at the front, signal lights and tail-lights above bumpers and exhaust tips under the licence plate in the rear.
3.8 litre cars have leather-upholstered bucket seats, an aluminium-trimmed centre instrument panel and console (changed to vinyl and leather in 1963), and a Moss 4-speed gearbox that lacks synchromesh for 1st gear ("Moss box"). 4.2 litre cars have more comfortable seats, improved brakes and electrical systems, and an all-synchromesh 4-speed gearbox. 4.2 litre cars also have a badge on the boot proclaiming "Jaguar 4.2 Litre E-Type" (3.8 cars have a simple "Jaguar" badge). Optional extras included chrome spoked wheels and a detachable hard top for the OTS.
An original E-Type hard top is very rare, and finding one intact with all the chrome, not to mention original paint in decent condition, is rather difficult. For those who want a hardtop and aren't fussy over whether or not it is an original from Jaguar, several third parties have recreated the hardtop to almost exact specifications. The cost ranges anywhere from double to triple the cost of a canvas/vinyl soft top.
A 2+2 version of the coupé was added in 1966. The 2+2 offered the option of an automatic transmission. The body is 9 in (229 mm) longer and the roof angles are different with a more vertical windscreen. The roadster remained a strict two-seater.
Less widely known, right at the end of Series 1 production and prior to the transitional "Series 1½" referred to below, a very small number of Series 1 cars were produced with open headlights. Production dates on these machines vary but in right hand drive form production has been verified as late as March 1968.[10] The low number of these cars produced make them amongst the rarest of all production E Types.
Following the Series 1 there was a transitional series of cars built in 1967-68, unofficially called "Series 1½", which are externally similar to Series 1 cars. Due to American pressure the new features were open headlights, different switches, and some de-tuning (with a downgrade of twin Zenith-Stromberg carbs from the original triple SU carbs) for US models. Some Series 1½ cars also have twin cooling fans and adjustable seat backs. Series 2 features were gradually introduced into the Series 1, creating the unofficial Series 1½ cars, but always with the Series 1 body style.
An open 3.8 litre car, actually the first such production car to be completed, was tested by the British magazine The Motor in 1961 and had a top speed of 149.1 mph (240.0 km/h) and could accelerate from 0-60 mph (97 km/h) in 7.1 seconds. A fuel consumption of 21.3 miles per imperial gallon (13.3 L/100 km; 17.7 mpg-US) was recorded. The test car cost £2097 including taxes.
Production numbers from Graham :
15,490 3.8s
17,320 4.2s
10,930 2+2s
Specifications. Body : length/width/height/wheelbase – cm (in) : 445/163/122/244 (175.2/64.3/48/2516); weight : 1140 kg (2516 lb).
Engine : front-mounted 6 cylinder-in-line 4235 cc, 3 carbs, 3 speed, automatic, rear-wheel drive. Maximum power : 228 bhp @ 5400 rpm. Top speed : 236 km/h (147 mph); 0-60 mph in 7.3 sec.