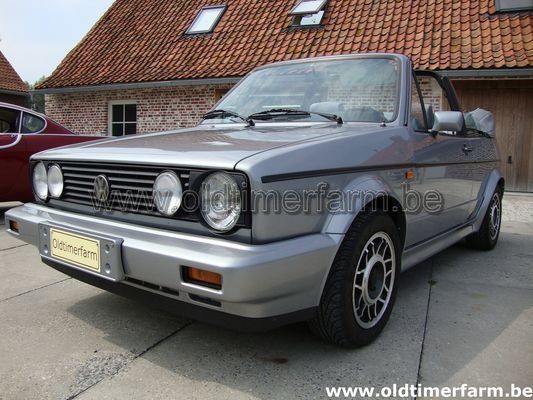 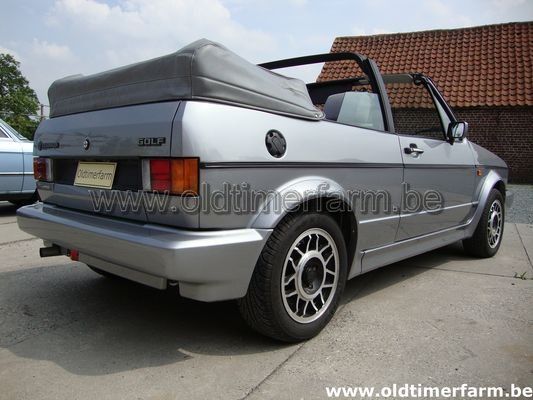 (from Wikipedia, the free Encyclopedia)  The Volkswagen Golf Mk1 Cabriolet was introduced in 1979, and was succeeded by the Golf Mk3 Cabriolet in 1993.  The Golf Cabriolet (or Typ 155) in Europe and Canada ("Rabbit Convertible" in America originally and renamed for the 1985 model year to "Cabriolet"), was sold from 1979 to 1993. (a convertible version of the Mk2 Golf was not made). It had a reinforced body, transverse roll bar, a high level of trim, and kept the pre-1980 style of rear lamp clusters from the Mk1 VW Golf.
The Mk1 Cabriolet is of unibody construction built entirely at the factory of Karmann, from stamping to final assembly; Volkswagen supplied the four-cylinder engine, suspension, interior, etc. for Karmann to install. The vinyl tops were insulated and manually or hydraulically operated, with a heated glass rear window.
The body of the Cabriolet did not change through the entire production run except for a larger fuel tank and smaller spare tire introduced in the 1984 model year.  In an attempt by Volkswagen to keep the car's styling current, all Cabriolets from 1988 on were fitted with a "Clipper" kit out of the factory.
There were a few special editions of the Cabriolet including the Etienne Aigner, Carat, Wolfsburg, and Best Seller editions.
Specifications. Body : length/width/height/wheelbase – cm (in) : 381/163/140/247 (150/64.2/55.1/97.2); weight : 1185 kg (2615 lbs).
Engine : front-mounted 4-cylinders-in-line 1781 cc (109 ci), manual 4-speed, front-wheel drive. Maximum power : 90 bhp @ 5500 rpm. Top speed : 172 km/h (108 mph).