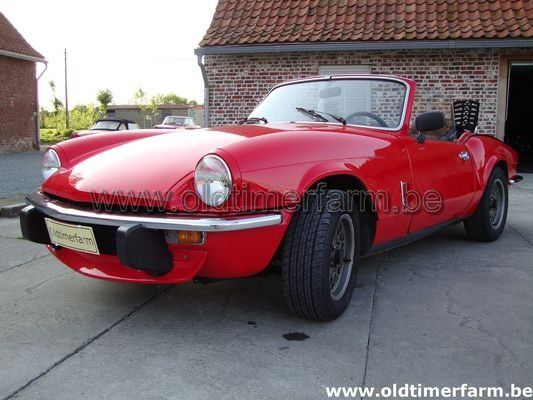 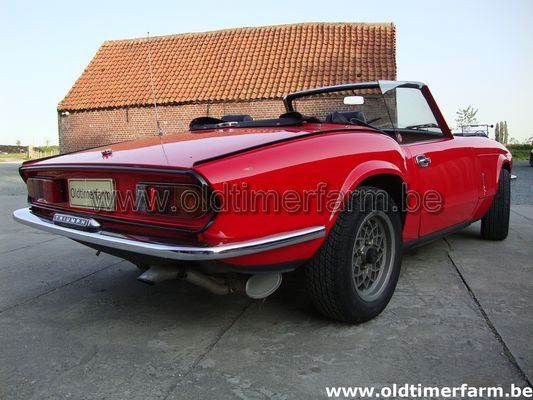 (From Wikipedia, the free encyclopedia)  The Triumph Spitfire was a small British two-seat sports car, introduced in October 1962. The vehicle was based on a design produced for Standard-Triumph in 1957 by Italian designer Giovanni Michelotti. The codename for the vehicle was the "Bomb". The car was largely based on the Triumph Herald saloon, and throughout its life was built at the Standard-Triumph works at Canley, Coventry.  Five separate Spitfire models were sold during the production run: the MK I, II, III, IV and 1500. The Triumph Spitfire was originally devised by Standard-Triumph to compete in the small sports car market which had opened up with the introduction of the Austin-Healey Sprite. The Sprite had used the basic drive train of the Austin A30/35 in a light body to make up a budget sports car; Triumph's idea was to use the mechanics from their small saloon, the Triumph Herald, to underpin the new project. Triumph had one advantage, however; where the Austin A30 range was of unitary construction, the Herald featured a separate chassis; it was Triumph's intention therefore to cut that chassis down and clothe it in a sports body, saving the costs of developing a completely new chassis / body unit.  In 1973 in the United States & Canada and 1975 in the rest of the world, the 1500 engine was used to make the Spitfire 1500; though in this final incarnation the engine was rather rougher and more prone to failure than the earlier units, torque was greatly increased which made it much more drivable in traffic. The reason for the engine problems was due to continued use of three main bearings for the crank shaft. While the rest of the world saw 1500s with the compression ratio reduced to 8.0:1, the American market model was fitted with a single Zenith-Stromberg carburettor and a compression ratio reduced to 7.5:1 to allow it to run on lower octane unleaded fuel and after adding a catalytic converter and exhaust gas recirculating system, the engine only delivered 100 bhp (75 kW) with a fast 0-60 time of 14.3 seconds.   The notable exception to this was the 1976 model year, where the compression was raised to 9:1. This model produced over 100 mph (160 km/h).   The American market Spitfire 1500 is easily identified by the big plastic over-riders and wing mounted reflectors on the front and back wings. The US specification models up to 1978 still had chrome bumpers, but on the 1979 and 1980 models these were replaced by black rubber bumpers with built-in over-riders. Chassis extensions were also fitted under the boot to support the bumpers.  Detail improvements continued to be made throughout the life of the Mark IV, and included reclining seats with "chequered brushed nylon centre panels" and head restraints, introduced for domestic market cars early in 1977 along with a new set of column stalk operated minor controls (as fitted already in the TR7) replacing the old dashboard mounted knobs and switches.  Also added for the model's final years were a wood dash, hazard flashers and an electric screen washer, in place of the previous manual pump operated ones.  Options such as the hard top, tonneau cover, map light and overdrive continued to be popular, though wire wheels ceased to be available.  The 1980 model was the last and the heaviest of the entire run weighing in at 1,875 lb (850.5 kg).  Base prices for the 1980 model year were $5,995 in the US and £3631 in the UK. The last Spitfire, an Inca Yellow UK-market model with hardtop and overdrive, rolled off the assembly line at Canley in August 1980, shortly before the factory closed.