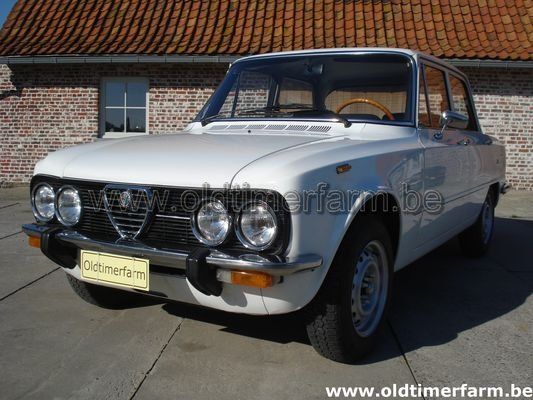 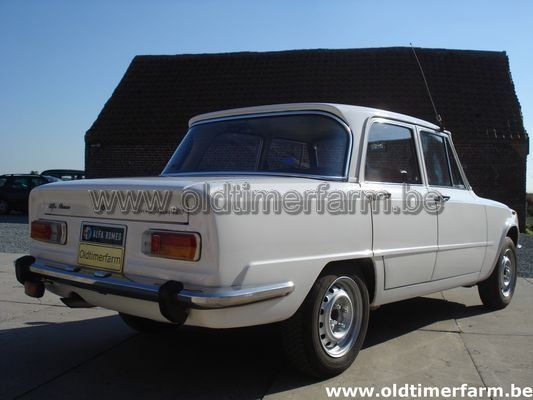 The Alfa Romeo Giulia (105 series) is an Alfa Romeo automobile. Alfa was one of the first manufacturers to put a powerful engine in a light-weight car for mainstream production.The styling was quite straight forward, but with a great amount of detail. The engine bay, cabin and boot were all square shaped. But the grill, the rooflines and details on the bonnet and boot made for an integrated design from bumper to bumper. It was also a car with a particularly low drag coefficient for that era. For example, the drag coefficient of the Giulia was lower than that of a Porsche 911 from the same period.
In 1972 a rationalisation of the Giulia range saw the Super 1300 (Tipo 115.09) and the Super (Tipo 105.26) re-released as the Super 1.3 and Super 1.6. The two models featured the same equipment, interior and exterior trim, differing only in engine size (1290 cc and 1570 cc) and final drive ratio. The 1300 Ti was dropped. A small Alfa Romeo badge on the C-pillar is a distinguishing feature, as are hubcaps with exposed wheel nuts.
The Giulia Super range was re-released in 1974 as the Nuova Super range. This dropped the Giulia name and featured a new black plastic front grille and a flat bonnet without the characteristic centre spine. Otherwise the cars differed little from their Giulia Super predecessors and bore the same Tipo numbers with an S suffix. Production ceased in 1977.
Characteristics. Body : length/width/height/wheelbase – cm (in) : 416/156/143/251 (163.8/61.4/56.3); weight : 1020 kg. Engine : 4-cylinders 1290 cc, front-mounted, 5-speed, manual; power : 82 bhp@6000 rpm. Top speed : 168 km/h ( 104 mph)