The Triumph Spitfire is one of the legends of the small British sports car. It was built from 1962 to 1980, which is about the same longevity as its direct competitor, the MG Midget (1961-1979). Moreover, they shared the same engine at the end of their career: a 1500 cc that developed the same power. NB: the example that Oldtimerfarm offers you is equipped with the 2-liter engine of the Triumph GT6. There were five generations of the Spifire, the last of which was produced from 1974 to 1980, just a few years before the brand's demise in 1984. Its basis was that of the cute Triumph Herald sedan, and its design was due to Giovanni Michelotti (who also designed, among others, the TR series). The purpose of the Spitfire was to complete the TR range, more powerful but also much more expensive. Their assembly took place at the historic Standard-Triumph factory near Coventry, which has been in operation since 1916. As for the actual production, it was located in several places that took care of the different components of the car. There were even two factories outside Britain: in South Africa and in Belgium, in Mechelen. The total production of the Spitfire is 314,332. 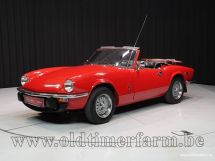 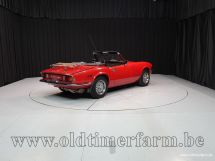