At the end of the Second World War, the French army, in bad shape, received help from the Americans who would give them equipment that remained in Europe, including many Jeeps.  But the France's desire for independence is rapidly becoming increasingly important, and French politicians want the army to be  equipped as much as possible with vehicles built in France.  Among other things, a project is entrusted to Delahaye to replace the American Jeeps.  It consists of developing a 4 x 4 of a little more than a ton in order to replace them and thus regain the independence of the army.  In order to avoid competition that would have been synonymous with waste, there will be no launch of offers.

The first Delahaye prototype  was ready in 1948, under the name "Delta".  Originally, it was equipped with  a Renault engine, because Delahaye wanted to target both the military markets and the agricultural market, since it was thought at that time that the small 4 × 4, could replace agricultural tractors, as the English did with the Land Rover. . The Delta prototype was inspected by the French army and tested in 1949 and 1950.  After being tested by the army, the vehicle will be called VLR, as "Light Reconnaissance Vehicle" (sometimes VLRD, with D as Delahaye").  It is equipped with a 4-cylinder engine of 63 horsepower, and a four-speed gearbox, with a gearbox that allows eight gear combinations.  Its speed is 110 km / h, it can cross coasts of 60 and 70% and can pass fords of 60 centimeters. The VLR can carry 400 kg of payload or four people and weighs 1,460 kg empty.  After a final overhaul, and with some slight modifications, the army placed an order for 4000 VLR Jeeps.   The leaders of Delahaye can finally rejoice, because the Delahaye 175 sedan has sold very badly.  Almost all VLRs are sold by the amée, except for some cars to individuals, especially farmers.  But production was stopped in March 1954, after the bankruptcy of the French manufacturer, but many vehicles in stock were delivered in 1955 and even in 1956.  Indeed, little by little, the army loses confidence in these vehicles, its reputation weakens.  And this collapse causes the fall of this prestigious brand, which will be taken over by Hotchkiss, its main competitor. 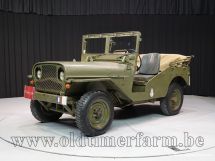 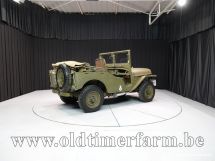