The Simca-Fiat 6 CV was manufactured under Fiat license by SAFAF (Société Anonyme Française des Automobiles Fiat) from 1932, then by SIMCA (Société Industrielle de Mécanique et Carrosserie Automobile, founded by Fiat) from July 1935. It was specially aimed at the country's middle classes. The success of this model is due to two main factors: the boldness of the manufacturer to launch a new car in particularly difficult times, and the know-how of its designers, who succeeded in creating a small car with the qualities specific to higher-class cars, and at relatively low production costs. The engineering team was headed by the brilliant Dante Giacosa, who was not yet thirty at the time. The production of the car began in 1935 under the name of French Fiat 6 CV F (F for France).

The first version was fitted with a 1-liter Fiat Type engine and a three-speed gearbox. Two years later, small improvements took place, such as a four-speed gearbox and a new, more aerodynamic two- or four-door body. 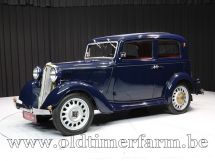 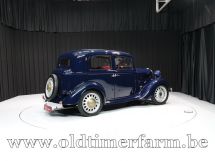