The Ferrari Testarossa (Type F110) went into production in 1984 as the successor to the Berlinetta Boxer. The Pininfarina-designed car was originally produced from 1984 to 1991, with two model revisions following the ending of Testarossa production and the introduction of the 512 TR and F512 M which were produced from 1992 to 1996. Almost 10,000 Testarossas, 512 TRs, and F512 Ms were produced, making it one of the most-produced Ferrari models, despite its high price and exotic design. The Testarossa premiered at the 1984 Paris Auto Show. All versions of the Testarossa had the power fed through the wheels from a rear-mounted, five-speed manual transmission. The rear mid-engine (between the axles but behind the cabin) keeps the centre of gravity in the middle of the car, which increases stability and improves the car's cornering ability, and thus results in a standing weight distribution of 40/60. The original Testarossa was re-engineered for 1992 and released as the 512 TR, and the F512 M at the 1994 Paris Auto Show. The car dropped the TR initials and added the M which in Italian stood for modificata, and the final version of the Testarossa. 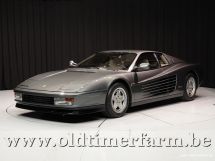 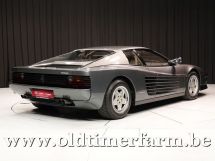