Car has Overdrive and has a surrey top: hardtop + softtop

The Triumph TR5 (or Triumph 250 in the USA) were produced only 3 years, from 1967 to 1969, before the arrival of the TR6, which will be the best-selling TR model in the world. The TR5, evolution of the TR4 (reminder: TR = Triumph Roadster), was designed by Giovanni Michelotti and officially presented on October 3, 1967 against its competitors, such as the MGB, the Merces Pagode, the Fiat Dino, the Austin Healey 3000. Its engine is brand new: it is a new 2.5-liter in-line 6-cylinder engine, with Lucas mechanical injection (PI: the first series injection system in the English automobile industry), for 150 DIN HP, instead of the 104 hp of the 4-cylinder of the TR4. As an option, it could be delivered with overdrive, hardtop. Produced in 2,947 copies in Europe, it is one of the rarest models of vintage cars among the TRs. As it did not correspond to the pollution standards in force in the USA, the injection was replaced by Zenith-Stromberg double-barrel carburettors. It was called TR250 and had 35 less horsepower, and had real success in North America (over 8000). 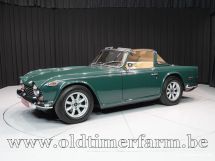 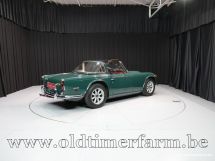