Despite its diminutive size, the 500 proved to be an enormously practical and popular vehicle throughout Europe. Besides the two-door coupé, it was also available as the "Giardiniera" station wagon; this variant featured the standard engine laid on its side, the wheelbase lengthened by 10 cm (4 in) to provide a more convenient rear seat, a full-length sunroof, and larger brakes from the Fiat 600. 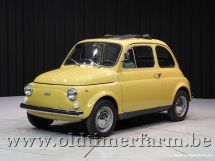