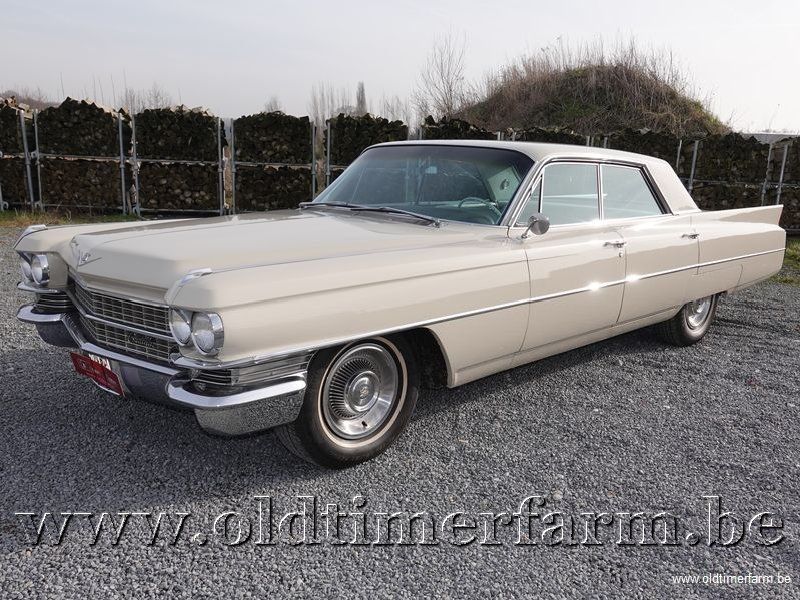 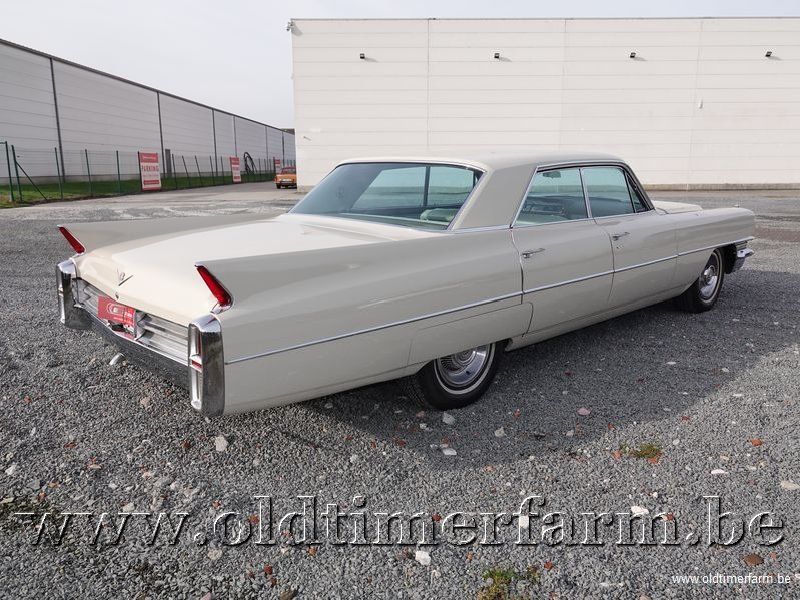 In overall terms 1963 Cadillac was essentially the same as last year. Exterior changes imparted a bolder and longer look than the 62 model. Hoods and deck lids were redesigned. The front fenders projected 4.625 inches further forward than in 1962 while the tailfins were trimmed down somewhat to provide a lower profile. Body side sculpturing was entirely eliminated. The slightly V-shaped radiator grille was taller and now incorporated outer extensions that swept below the flush-fender dual headlamps. Smaller circular front parking lamps were mounted in those extensions. A De Ville signature script was incorporated above the lower beltline molding near the rear of the body. A total of 143 options including bucket seats with wool, leather or nylon upholstery fabrics and wood veneer facings on dash, doors and seatbacks, set an all-time record for interior appointment choices. Standard equipment was the same as the previous year. The engine was entirely changed, though the displacement and output remained the same, 390 cu in (6.4 l) and 325 hp (242 kW)

It was time for another facelift in 1964 and really a minor one. New up front was a bi-angular grille that formed a V-shape along both its vertical and horizontal planes. The main horizontal grille bar was now carried around the body sides. Outer grille extension panels again housed the parking and cornering lamps. It was the 17th consecutive year for the Cadillac tailfins with a new fine-blade design carrying on the tradition. Performance improvements including a larger V-8 were the dominant changes for the model run. Equipment features were same as in 1963 for the most part. Comfort Control, a completely automatic heating and air conditioning system controlled by a dial thermostat on the instrument panel, was introduced as an industry first. The engine was bumped to 429 cu in (7 l), with 340 hp (253.5 kW) available. Performance gains from the new engine showed best in the lower range, at 20 to 50 mph traffic driving speeds. A new technical feature was the Turbo-Hydramatic transmission, also used in the Eldorado and the Sixty Special. A De Ville script above the lower belt molding was continued as an identifier. This was the first year for the De Ville convertible. De Ville sales reached 110,379 units, accounting for nearly two thirds of all Cadillacs sold.