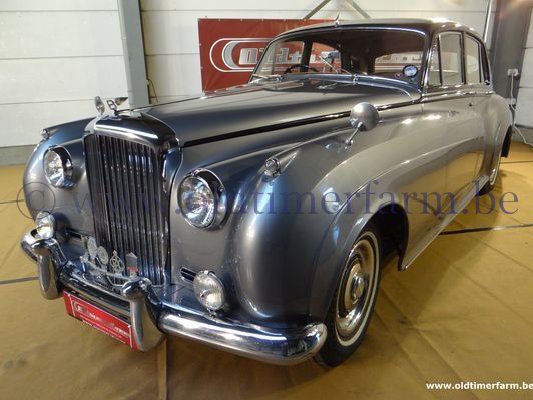 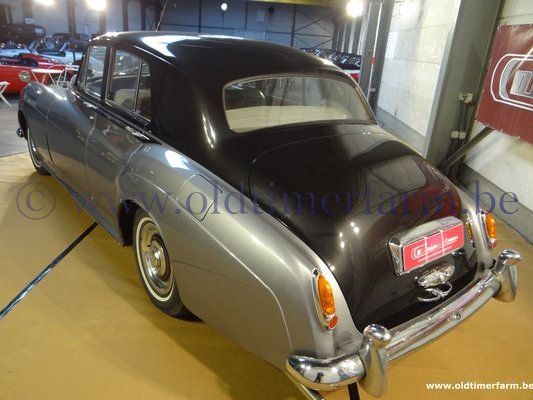 Bentley S was a luxury car produced by Bentley Motors Limited from 1955 until 1959. Bentley (and Rolls-Royce)'s first true complete redesign of their standard production car after World War II and their last standard production car with an independent chassis. These cars were given a new V8 engine in late 1959, and those cars are identified as S2. Twin headlamps and a facelift to the front arrived in late 1962, and those cars are known as S3. This shape remained in production with those modifications until late 1965 when it was replaced with the completely new chassisless monocoque T series. It was announced at the end of April 1955, and it was noted that the existing Continental model would continue. The new standard steel saloon replaced the R type standard steel saloon which had been in production, with modifications, since 1946. It was a more generously-sized five or six seater saloon with the body manufactured in pressed steel with stressed skin construction. Doors, bonnet and luggage locker lid were of aluminium. Having a totally new external appearance, although with the traditional radiator grille, the main differences from the R type were: three inches longer wheelbase lower build without reducing headroom and with an enlarged luggage boot softer suspension with electrically operated control of rear dampers lighter steering and improved braking engine capacity increased to 4887cc, the same size as used in the Bentley Continental four speed automatic gearbox was standard, with ability to select individual ratios if desired. As with the preceding Mark VI and R type Bentleys, there was almost no difference between standard Bentley and Rolls-Royce models; this Bentley S differing only in its radiator grille shape and badging from the Rolls-Royce Silver Cloud I. The models shared the 4.9 L (4887 cc/298 in³) straight-6 engine. They were the last vehicles to be powered by descendants of the engine originally used in the Rolls-Royce Twenty from 1922 to 1929. The bore was 95.25 mm (3.7 in), stroke was 114.3 mm (4.5 in) and compression ratio 6.6:1. Twin SU carburetors were fitted, with upgraded models from 1957. A 4-speed automatic transmission was standard, with a 4-speed manual available as an option until 1957. A standard wheelbase car tested by the British magazine The Motor in 1957 had a top speed of 103 mph (166 km/h) and could accelerate from 0-60 mph (97 km/h) in 13.1 seconds. A fuel consumption of 16.1 miles per imperial gallon (17.5 L/100 km; 13.4 mpg-US) was recorded. The test car, which had the optional power steering, cost £6305 including taxes of £1803. Production of standard specification cars S: 3072 (145 with coachbuilt bodies) S long wheelbase: 35 (12 with coachbuilt bodies) Specifications. Bodywork. Length/width/height/wheelbase – cm (in) : 539/190/163/312 (212/74.8/64.2/123); weight : 1725 kg (3807 lb). Mechanics. Inline 6 engine, 4887 cc (298 ci), front mounted, 12 valves, 2 SU HD6 carburettors, automatic 4 speed gearbox, rear-wheel drive. Unknown power and torque.