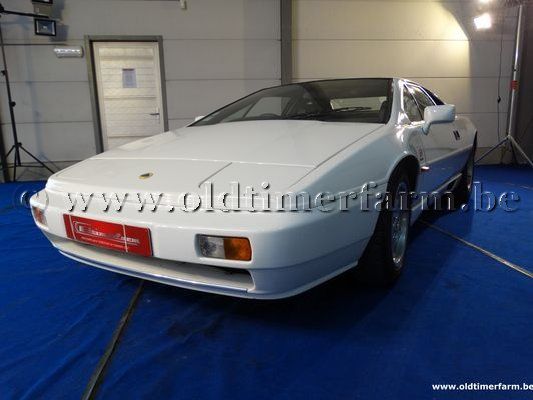 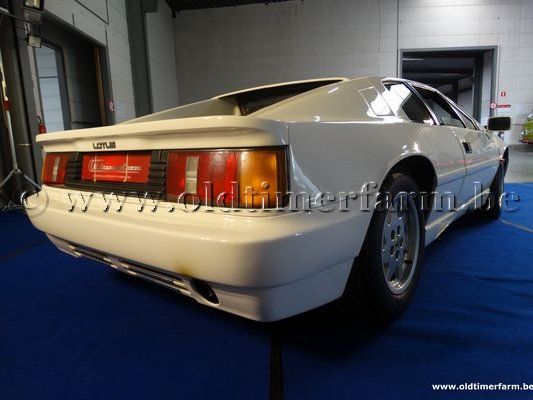 The Lotus Esprit is a sports car that was built by Lotus in the United Kingdom between 1976 and 2004, as well as a future release in 2014. The silver Italdesign concept that eventually became the Esprit was unveiled at the Turin Motor Show in 1972 as a concept car, and was a development of a stretched Lotus Europa chassis. It was among the first of designer Giorgetto Giugiaro's polygonal "folded paper" designs. Originally, the name Kiwi was proposed, but in keeping with the Lotus tradition of having all car model names start with the letter "E", the name became Esprit. By the close of 1980, Lotus was effectively building three different models of Esprit, with distinct chassis designs and body moulds - the Domestic (i.e. UK) S2.2, the Export S2.2, and the dry-sump Turbo Esprit. Introduced in April 1981, the Turbo Esprit and S3 (Series 3) Esprits marked a necessary consolidation: both new models had a common chassis, inheriting much of the configuration of the Essex cars, whilst body production was based on a single common set of moulds. In 1987, a new version of the Esprit was unveiled, incorporating rounder styling cues given by designer Peter Stevens (who later designed the McLaren F1). A new Lotus patented process was introduced to create the new body, called the VARI (Vacuum Assisted Resin Injection) process, which offered more advantages than the previous hand laid process. Kevlar reinforcement was added to the roof and sides for roll-over protection,[16] resulting in an increase of the Esprit's torsional rigidity by 22 percent.[17] Giugiaro is said to have liked the restyling, claiming it was perhaps too close to his original design. The Stevens styled cars retained the mechanical components of the previous High Compression Esprit and Turbo Esprit, but introduced a stronger Renault transaxle, which necessitated a move to outboard rear brakes. However, the MY 1988 North American Esprit Turbo kept its Citroën SM type transaxle and the Bosch K-Jetronic fuel injection system used in the previous model year. The car's Type 910 engine retained 215 bhp (160 kW; 218 PS) and 220 lb•ft (298 N•m), but decreased its zero to sixty from 5.6 seconds to a varied time between 5.4[18] - 5.1[19] seconds and a top speed of over 150 mph (240 km/h). The exterior style changes were accompanied by a redesign of the interior, allowing a little more space for the occupants. The Stevens styled Esprit is often known by its project code of X180. Specifications Bodywork Length: cm (in): 419 (165) Width: cm (in): 186 (73.2) Height: cm (in): 111 (43.7) Wheelbase: cm (in): 244 (96.1) Weight: kg (lb): 1120 (2472) Mechanics. Displacement: straight-four 2174 cc (133 ci), rear-mounted Valve gear: 16 Fuel system: 2 Dell'Orto carburettors Gearbox: 5-speed manual Driven wheels: rear-wheel drive Maximum power: 160 bhp at 6500 rpm Maximum torque: 221 Nm at 5000 rpm Maximum speed: 222 km/h (138 mph)