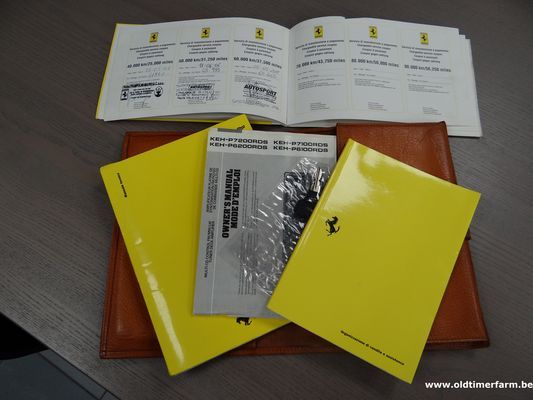 0032 472 40 13 38
MAIL US
VISIT US
FIND US AT EVENTS
Reference ch.5876
Make Ferrari
Model 512 TR '92
Type coupe
Construction year 1992
KM 60500
Cilinder displacement 4900
Gears manual
Steering left hand drive
Full history and book, last maintenance with belt at 60.000km, EU car, new rear tyres The Testarossa can trace its roots back to the faults of the 1981 512i BB. The problems that the Testarossa was conceived to fix, included a cabin that got increasingly hot from the indoor plumbing that ran between the front-mounted radiator and the midships-mounted engine and a lack of luggage space. To fix these problems Ferrari and Pininfarina designed the Testarossa to be larger than its predecessor, the Berlinetta Boxer. The spectacular design came from Pininfarina. The design team at Pininfarina consisted of Ian Cameron, Guido Campoli, Diego Ottina and Emanuele Nicosia. With little surprise, they were led by design chief Leonardo Fioravanti, the maestro behind many beautiful Ferraris. The design was originated by Nicosia, but the guidance of Fioravanti was equally important. Being a trained aerodynamist, Fioravanti applied his know-how to set the aerodynamics layout of the car. This meant the large side intakes were not only a statement of style but actually functional  they drew clean air to cool the side radiators and then went upward and left the car through the ventilation holes located at the engine lid and the tail. As a result, the Testarossa did not need a rear spoiler like Lamborghini's Countach yet produced zero lift at its rear axle. The aerodynamic drag coefficient of 0.36 was also significantly better than the Lamborghini's 0.42. Specifications Bodywork Length: cm (in): 448 (176.4) Width: cm (in): 198 (77.8) Height: cm (in): 114(44.7) Wheelbase: cm (in): 255 (100.4) Weight: kg (lb): 1570 (3465) Mechanics. Displacement: Boxer 12 4943 cc (302 i), rear-mounted Valve gear: 48 Fuel system: injection Gearbox: 5-speed, manual Driven wheels: rear-wheel drive Maximum power: 428 hp at 6750 rpm Maximum torque: 501 Nm at 5500 rpm Maximum speed: 307 km/h (191 mph)
Read more