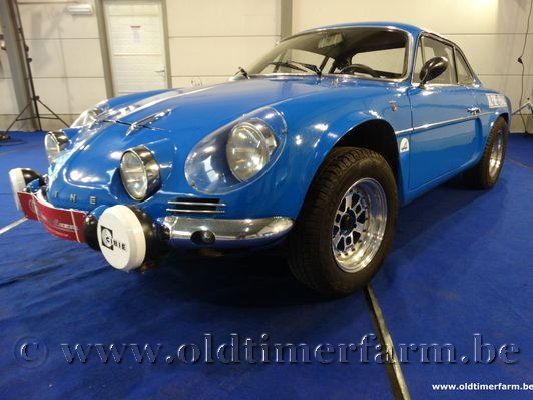 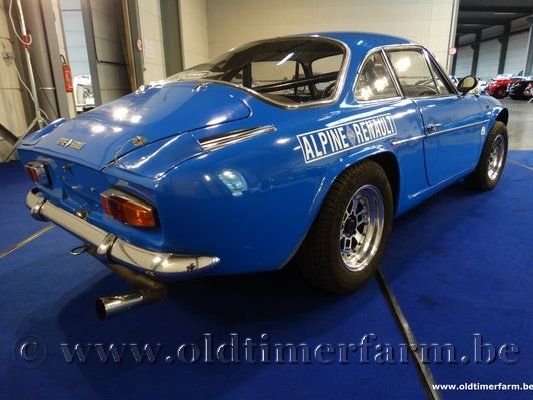 The Alpine A110, also known as the "Berlinette", was a sports car produced by the French manufacturer Alpine from 1961 to 1977. The Alpine A110 was introduced as an evolution of the A108. The A110 was powered by various Renault engines. Like other road-going Alpines, the 1961 A110 used many Renault parts - including engines. But while the preceding A108 was designed around Dauphine components, the A110 was updated to use R8 parts. Unlike the A108, which was available first as a cabriolet and only later as a coupé, the A110 was delivered first with "Berlinetta" bodywork and then as a cabriolet. The main visible difference with the A108 coupé was a restyling of the rear body to fit the larger engine, which gave the car a more aggressive look. Like the A108, the A110 featured a steel backbone chassis with fiberglass body. The A110 was originally available with 1.1 L R8 Major or R8 Gordini engines. The Gordini engine delivered 95 hp (71 kW) SAE at 6,500 rpm. The A110 achieved most of its fame in the early 1970s as a victorious rally car. After winning several rallies in France in the late 1960s with iron-cast R8 Gordini engines the car was fitted with the aluminium-block Renault 16 TS engine. With two dual-chamber Weber 45 carburetors, the TS engine delivered 125 hp (93 kW) DIN at 6,000 rpm. This allowed the production 1600S to reach a top speed of 210 km/h (130 mph). The longer wheelbase 2+2 Alpine GT4, originally considered a version of the A108, was updated with A110 engines and mechanicals, now being marketed as the "A110 GT4". The car reached international fame during the 1970-1972 seasons when it participated in the newly created International Championship for Manufacturers, winning several events around Europe and being considered one of the strongest rally cars of its time. Notable performances from the car included victory in the 1971 Monte Carlo Rally with Swedish driver Ove Andersson. With the buy-out of Alpine by Renault complete, the International Championship was replaced by the World Rally Championship for 1973, at which time Renault elected to compete with the A110. With a team featuring Bernard Darniche, Jean-Pierre Nicolas and Jean-Luc Thérier as permanent drivers and "guest stars" like Jean-Claude Andruet (who won the 1973 Monte Carlo Rally) the A110 won most races where the works team was entered, making Alpine the first World Rally Champion. Later competition-spec A110s received engines of up to 1.8 litres. As well as being built at Alpine's Dieppe factory, A110 models were constructed by various other vehicle manufacturers around the world. The Alpine A110 was produced in Mexico under the name "Dinalpin", from 1965 to 1974, by Diesel Nacional (DINA), which also produced Renault vehicles. The Alpine A110 was also produced in Bulgaria under the name "Bulgaralpine", from 1967 to 1969, by a cooperative formed between SPC Metalhim and ETO Bulet, whose collaboration also resulted in the production of the Bulgarrenault. In 1974 the mid-engined Lancia Stratos, the first car designed from scratch for rally racing, was operational and homologated. At the same time, it was obvious that the tail-engined A110 had begun reaching the end of its development. The adoption of fuel injection brought no performance increase. On some cars, a DOHC 16-valve head was fitted to the engine, but it proved unreliable. Chassis modification, like the use of an A310 double wishbone rear suspension, homologated with the A110 1600SC, also failed to increase performance. On the international stage, the Stratos proved to be the "ultimate weapon", making the A110, as well as many other rally cars, soon obsolete. This particular Alpine is Spanish made (in Spain until 1976, in France until 1970). Specifications Bodywork Length: cm (in): 385 (151.6) Width: cm (in): 146 (57.5) Height: cm (in): 113 (44.5) Wheelbase: cm (in): 210 (82.7) Weight: kg (lb): 730 (1611) Mechanics. Displacement: straight four 1296 cc (79 ci), rear-mounted Valve gear: 8 Fuel system: twin barrel Weber carburettor Gearbox: 4-speed, manual Driven wheels: rear-wheel drive Maximum power: 110 bhp at 6000 rpm Maximum speed: 195 km/h (121 mph)