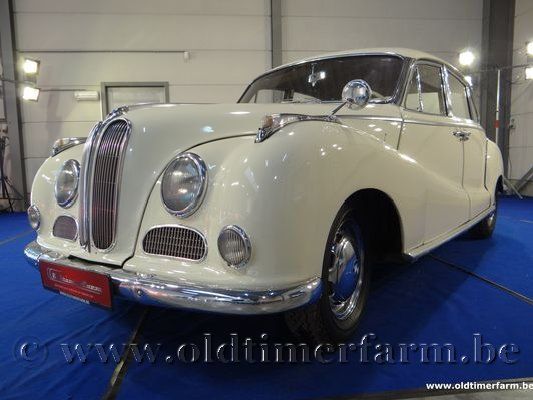 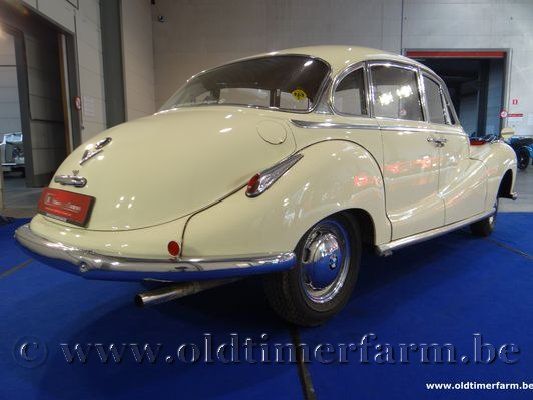 (from Wikipedia, the free encyclpedia) The BMW 501 was a luxury saloon car manufactured by BMW from 1952 to 1958. Introduced at the first Frankfurt Motor Show in 1951, the 501 was the first motor car to be manufactured and sold by BMW after the Second World War. The 501 and its derivatives, including the V8 powered BMW 502, were nicknamed “Baroque Angels” by the German public. The BMW 502 was the first postwar German car to be manufactured with a V8 engine. While the 501 and 502 model numbers were discontinued in 1958, variations of the model, with the same platform and body, were continued until 1963. Before the construction of the first prototype of the 501, Böning had calculated the mass of the car as designed, and realized that the six-cylinder engine would be barely adequate to power the car. He proposed the development of a larger engine to power future versions of the car to the management, who accepted his proposal. Böning began the design and development of a V8 engine similar in general design to the then-new Oldsmobile Rocket V8, with a single camshaft in the vee operating overhead valves in wedge-shaped combustion chambers through pushrods. The BMW OHV V8 engine differed from its Detroit contemporaries in the use of an aluminium alloy block with cast-iron cylinder liners, and in its smaller size, initially with a 74 millimetres (2.9 in) bore and a 75 millimetres (3.0 in) stroke, giving a displacement of 2,580 cc (157 cu in). The development of the V8 was completed by Fritz Fiedler, who replaced Böning as BMW's chief engineer in 1952. The V8 engine was introduced at the 1954 Geneva Motor Show as the engine of the new BMW 502 saloon car. Using the same chassis and basically the same body as the 501, the 502 was more luxuriously appointed and, with its light V8 engine producing 100 horsepower (75 kW) with a single two-barrel Solex carburettor, was much faster. The published top speed of 160 km/h (99 mph) was far higher than that of the first six-cylinder version of the Ponton Mercedes launched the same year. At the time of its introduction the 502 was reportedly Germany's fastest passenger sedan in regular production. The 502 was acclaimed as Germany's first post-war V8 powered car, but its high price of DM17,800 led to low sales; only 190 were sold in its first year of production. The 502 was distinguished from the 501 by additional chrome trim and more lavish interior fittings. Fog lights and individual front seats were also now included as standard features. The 502 was mildly restyled in 1955 with a wraparound rear window. Specifications. Bodywork. Length/width/height/wheelbase – cm (in) : 473/178/153/284 (186.2/70.1/60.2/111.6); weight : 1410 kg (3112 lb). Mechanics. V8 engine 2580 cc (157 ci), front-mounted, 16 valves, 1 2-barrel Solex carburettor, manual 4-speed gearbox, rear-wheel drive. Maximum power : 100 bhp at 5800 rpm; torque : 161 Nm at 2000 rpm. Top speed : 167 km/h (104 mph).