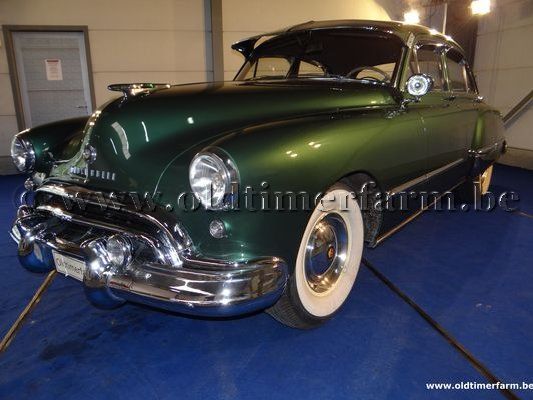 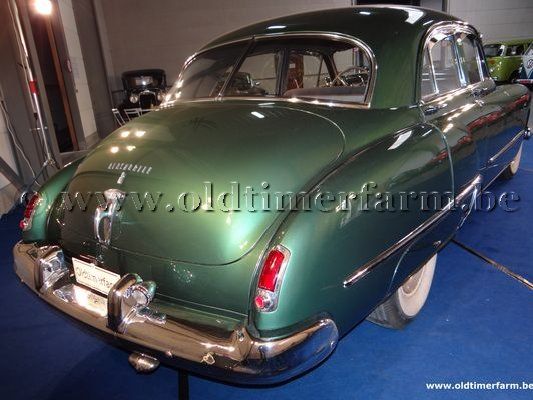 0032 472 40 13 38
MAIL US
VISIT US
FIND US AT EVENTS
Reference ch. 104H
Make Oldsmobile
Model 98 Green
Type berline
Construction year 1948
KM -
Gears manual
Steering left hand drive
The Oldsmobile 98 (a Series 90 with an 8-cylinder engine, hence the Ninety-Eight) was a full-size automobile and the flagship model of the Oldsmobile division of General Motors. The name first appeared in 1941 and was used again after American consumer automobile production resumed post-World War II. It was, as it would remain, the top-of-the-line model, with lesser Oldsmobiles having lower numbers such as the A-body 66 and 68, and the B-body 76 and 78. The Series 60 was retired in 1949, the same year the Oldsmobile 78 was replaced by the 88. The Oldsmobile 76 was retired after 1950. This left the two remaining number-names to carry on into the 1990s as the bread and butter of As it was the top-line Oldsmobile, the series had the most technologically advanced items available, such as the Hydramatic automatic transmission, the Autronic Eye, an automatic headlight dimmer, and Twilight Sentinel (a feature that automatically turned the headlights on and off via a timer, as controlled by the driver), and the highest-grade interior and exterior trim. Third generation (19481953) For the first time since 1940 Oldsmobile offered totally different styling during a single model year. The top of the line 1948 Oldsmobile 98 drew heavily from the Futuramic styling concept that would be used on all 1949 Oldsmobiles. Standard equipment on 98s included a solenoid starter, fender skirts, E-Z-l rearview mirror, and foam rubber seat cushions. The 98s also included front and rear bumper guards, vacuum booster pump, plastic radiator ornament, dual horns, dual sun visors, and cigarette lighter. Deluxe equipment added front and rear floor mats, Deluxe steering wheel, wheel trim rings, rear seat armrests, and hydraulic window, seat and top controls on all convertibles. Upholstery was either broadcloth or leather. The standard tire size was 6.50 x 16. With the introduction of new postwar styling Custom Cruiser 98 was renamed the Futuramic 98. The Custom Cruiser name would be revived to denote full-size Oldsmobile station wagons in 1971. The new styling was apparently popular with a record 65,235 98s sold, exceeding the number of 90s sold in 1940 for the first time. Specifications Bodywork Length: cm (in): 541 (213) Width: cm (in): 198 (78) Height: cm (in): 162 (64) Wheelbase: cm (in): 318 (125) Weight: kg (lb): 1720 (3793) Mechanics. Displacement: straight-8 4211 cc (257 ci), front-mounted Valve gear: 16 Fuel system: 2 carbus Gearbox: 3-speed, manual Driven wheels: rear-wheel drive Maximum power: 115 bhp at 3600 rpm Maximum torque: 218 lbft at 2000 rpm
Read more