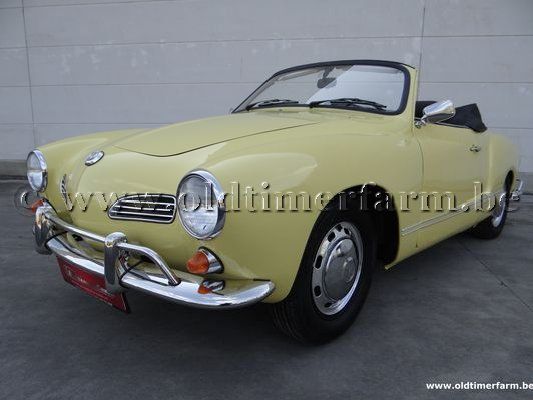 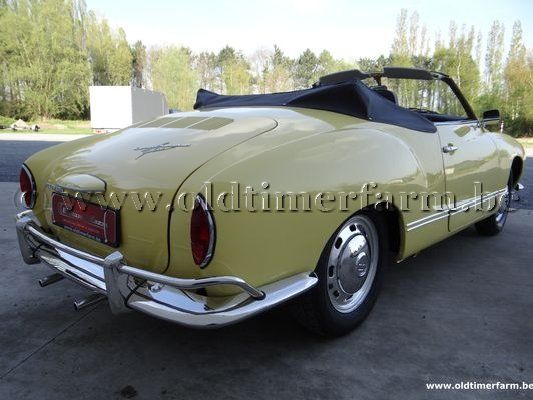 0032 472 40 13 38
MAIL US
VISIT US
FIND US AT EVENTS
Reference ch. 6537
Make Volkswagen
Model Karmann Ghia Cabriolet Yellow
Type cabrio
Construction year 1969
KM -
Cilinder displacement 1600
Gears manual
Steering left hand drive
(from Wikipedia, the free encyclopedia) The Type 14 debuted at the October 1953 Paris Auto Show as a styling concept created for Ghia by Luigi Segre. In the early 1950s, Volkswagen was producing its economy car, the Type 1 (Beetle). With an increase in post-war standards of living, executives at Volkswagen proposed adding a halo car to its model range, contracting with German coachbuilder Karmann for its manufacture. Karmann in turn contracted the Italian firm Ghia, who adapted styling themes previously explored for Chrysler and Studebaker to a Beetle floorpan widened by 12 in (300 mm). In contrast to the Beetle's machine welded-body with bolt-on fenders, the Karmann Ghia's body panels were butt-welded, hand-shaped and smoothed with English pewter in a time-consuming process commensurate with higher-end manufacturers  and resulting in the Karmann Ghia's higher price. The design and prototype were well received by Volkswagen executives, and in August 1955 the first Type 14 was manufactured in Osnabrück, Germany. Public reaction to the Type 14 exceeded expectations, with over 10,000 sold in the first year. In September 1961, Volkswagen introduced the VW 1500 Karmann Ghia, or Type 34, based on its new Type 3 platform, featuring Volkswagen's new flat 1500cc engine design, and styling by Italian engineer Sergio Sartorelli. Due to model confusion with the Type 14 1500 introduced in 1967, the Type 34 was known variously as the "Der Große Karmann" ("the big Karmann") in Germany, "Razor Edge Ghia" in the United Kingdom, or "European Ghia" (or "Type 3 Ghia" among enthusiasts) in the United States. Today the name Type 34 is recognized as the worldwide naming convention. The second automobile model in the world to have this option, an electrically operated sliding steel sunroof was optional in 1962. The styling offered more interior and cargo room than the original Karmann Ghia. It featured an electric clock, three luggage spaces, built-in fog lights, round tail lights, upper & lower dash pads, door pads, & long padded armrests. It was the fastest production VW model of its day. Until it was replaced by the VW-Porsche 914, it was the most expensive and luxurious passenger car VW manufactured in the 1960s  back then you could have purchased two basic Beetles for the price of one Type 34 in many markets. The comparatively high price meant it never generated high demand, and only 42,505 (plus 17 prototype convertibles were built over the car's entire production life between 1962 and 1969 (roughly 5,000 a year). Today, the Type 34 is considered a semi-rare collectible with values ranging from US$25K (nice original or restored) to $8K (driving project) to $3K (non-driving parts car). Values in Europe are the highest with an unrestored original Pearl White 1962 Coupe selling for US$34,000 in Germany in late 2010. Although the Type 34 was available in most countries, it was not offered officially in the U.S.  VW's largest and most important export market  another reason for its low sales numbers. Many still made their way to the USA (most via Canada), and the USA has the largest number of known Type 34s left in the world (400 of the total 1,500 to 2,000 or so remaining. Like its Type 14 brother, the Type 34 was styled by the Italian design studio Ghia. There are some similar styling influences, but the Type 14 Ghia looks very different from the Type 34. The chassis is also a major difference between the cars: the Type 14 shares its chassis with a Beetle, whereas the Type 34 body is mounted on the Type 3 chassis and drive train (the same as in a 1500/1600 Notchback, Variant (Squareback) and Fastback)  all distinguished by the standard 1500 pancake engine that allowed a front and rear boot. The Type 34 is mechanically the same as other Type 3s. All bodywork, interior, glass, bumpers, and most of the lenses are unique to the Type 34. The Wilhelm Karmann factory assembly line which assembled the Type 34 also produced the VW-Porsche 914 (known as Porsche 914 in the USA)  the Type 34's replacement. Specifications Bodywork Length : cm (in): 414 (163) Width : cm (in): 163 (64.2) Height : cm (in): 132 (52) Wheelbase : cm (in) : 240 (94.5) Weight: kg (lb) : 870 (1918) Mechanics. Displacement : flat 4 1584 cc, air-cooled, rear-mounted Valve gear : 8 Fuel system : 1 Solex carburettor Gearbox : 4 speed manual Driven wheels : rear-wheel drive Maximum power : 50 bhp at 4000 rpm Maximum torque : 106 Nm at 2800 rpm Maximum speed : 138 km/h (86 mph)
Read more