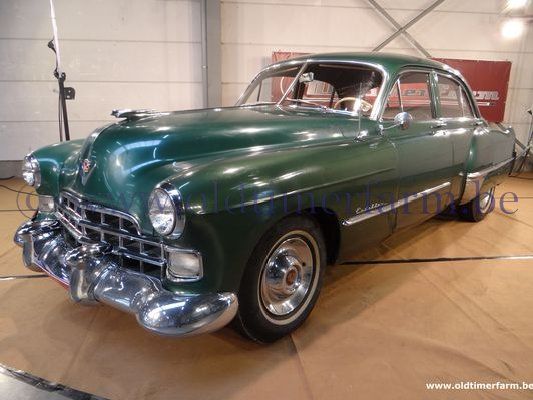 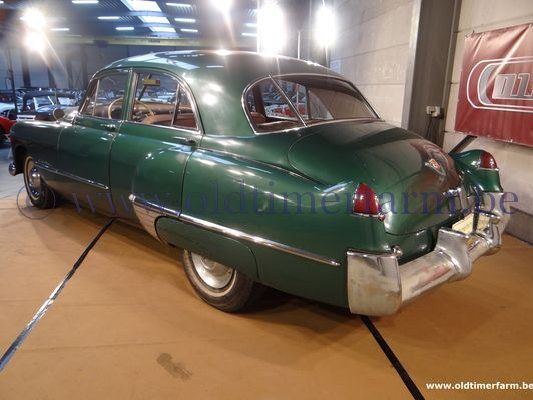 The formerly-smaller Series 61 was moved to the Series 62's General Motors C-Body platform, making them very similar. Major design changes marked the C-bodied Cadillacs for 1948. They featured General Motors first all-new postwar body with styling advances including tailfins inspired by the Lockheed P-38 fighter plane.[6] There was also an attractive eggcrate grille, which was higher in the middle than on the sides. The front of the car was protected by a heavier and more massive bumper bar that curved around the fenders. The Cadillac crest was centered low in a "V" above the radiator grille. Chrome headlamp rims were used. Cars in the 61 series lacked bright metal front fender shields and under-taillight trim. A new dashboard with "rainbow" style instrument cluster and leather grained panels extending to the carpets was seen only this year. The big news at Cadillac in 1949 centered on engineering, with the release of a new overhead valve V8 engine. This 331 in³ engine produced 160 hp (119 kW). Only minor appearance changes were seen. They included a more massive grille treatment with grooved extension panels housing the front parking lights and chevron slashes below the taillamps on the coupes. Once again the cars in this line lacked front fender gravel shields and rocker panel moldings and had plainer interior trim. A larger luggage compartment lid was seen on all sedans except early production units. Standard equipment now included twin back-up lamps mounted on the deck lid latch panel. Cadillacs had extensive styling changes in 1950. They looked generally heavier and had low sleek contours with longer rear decks, more sweeping front fenders and a broken rear fender line. The hood protruded out more at front and was underlined by a more massive eggcrate grille. Round parking lights were used, but as in the past, when buyers chose fog lamps an additional bulb and larger housing were used. This setup combined the fog lamps ans the directional signals. One piece windshields were introduced and the leading edge of the rear fenders which had a broken-off look, was highlighted by chrome imitation air slots. The rear fenders were longer and ended in a swooping tailfin design. The Cadillac script again appeared on the sides of the front fenders, but was now positioned closer to the front door opening gap. As far as Series 61 models went a big styling change was a return to marketing this line on the shorter wheelbase B-body than used on the Series 62. This led to some styling differences. For example the Series 61 Sedan had no rear window ventiplanes and featured a rear wraparound backlight. An identifying features on both models was the absence of rocker panel moldings and rear quarter panel chrome underscores. The Series 61 was 4 inches shorter than in the previous season. A minor face lift and small trim variations were the main Cadillac styling news in 1951. Miniature eggcrate grilles were set into the out-board grille extension panels below the headlights. Larger, bullet shaped style bumper guards were used. The features list included handbrake, warning lamp; key start ignition; steering column cover; Delco-Remy generator; knee-action front suspension; directionals; mechanical fuel pump; dual downdraft carburetor; slipper-type pistons; rubber engine mountings; oversize brakes; Super Cushion tires; one-piece windshield; intake silencer; 160-hp engine; oil bath air cleaner; equalized manifolding; automatic choke and luxury appointments. On the dashboard "idiot lights" were used to monitor oil pressure and electrical charge rate instead of gauges. The smaller body was once again used on the 61s and again identified by the lack of chrome underscores. However a new medallion appeared on the rear roof pillar of the Series 61, above the upper beltline molding.