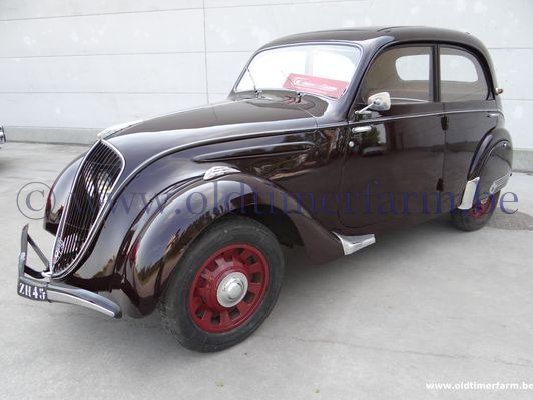 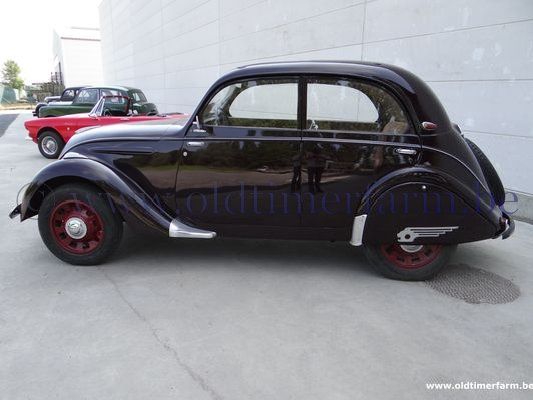 The Peugeot 202 was an automobile from Peugeot. Production of the car ran between 1938 and 1942 and then, after a brief production run of 20 in early 1945, restarted in mid-1946. It was sold until 1949, by when it had been replaced by the 203
The 202 was instantly recognisable as a Peugeot from the way that the headlights were set, as on the older 302, close together, in a protected location behind the front grille. Most customers chose the four-door berline (saloon) version which by 1948 came with a steel-panel sliding sun roof included in the price. However the boot/trunk was small and could be accessed only from within the car, there being no outside boot lid. The two-seater two-door cabriolet "décapotable" did have a separate boot lid but cost approximately 30% more than the berline. Priced very closely to the berline was a structurally similar four-door four-seater "berline découvrable", which featured a full fold away hood: this type of body would become difficult to provide using the monocoque body structure then becoming mainstream and which would be a feature of the Peugeot 203.
Between 1947 and 1949 the manufacturer produced 3,015 timber bodied "break" (estate) conversions: this model cost 55% more than the berline, and anticipated future Peugeot policy by using a slightly longer chassis than that used on other 202 versions. The extensive use of timber took the company back to a technology that it had abandoned in 1931 when production of the Type 190 ended, and according to the manufacturer was above all a response to shortage of sheet steel in post-war France.
There were only two models offered in France in this class offering so wide a range of body types. The other was the still popular but soon to be replaced Simca 8.
Specifications
Bodywork
Length : cm (in): 411 (161.8)
Width : cm (in): 150 (59.1)
Height : cm (in): 155 (61)
Wheelbase : cm (in) : 245 (96.5)
Weight: kg (lb) : 785 (1732)
Mechanics.
Displacement : straight-four 1133 cc (69 ci), front-mounted
Valve gear : 8
Fuel system : 1 carburetor
Gearbox : 3-speed manual
Driven wheels : rear-wheel drive
Maximum power : 30 bhp at 4000 rpm.
Maximum torque : + 57 Nm
Top speed : 100 km/h (62 mph)