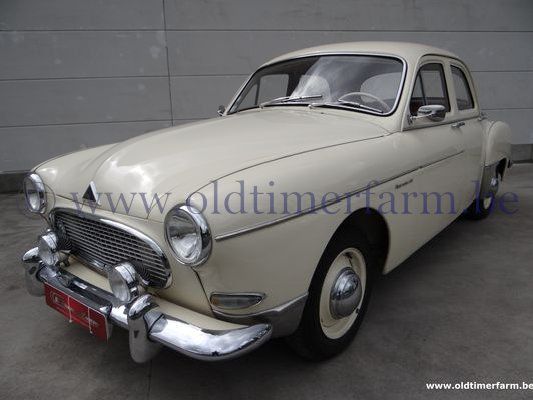 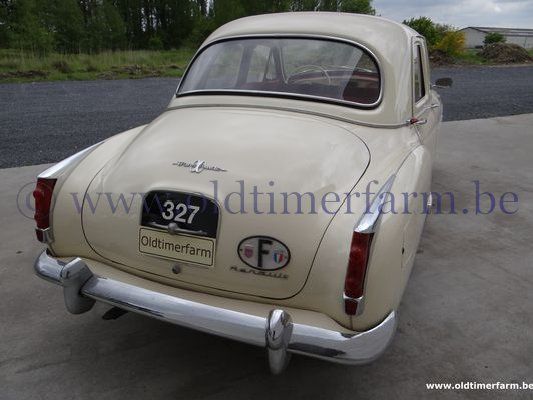 The Renault Frégate is a full-size or executive car produced by the French automaker Renault between 1951 and 1960.
The Frégate was conceived in the years immediately following World War II. Renault, which then had recently been brought under control of the French state, needed a new modern, upmarket model both to improve its image and to cater to the needs of middle class consumers in the hoped for economic recovery. Several prototypes were produced before the Frégate design was put into production.
Initially, the car was to have had a rear-engined layout as in the recently launched 4CV, but Renault abandoned the rear engined "Project 108" and in 1949 decided to go with an engine mounted ahead of the driver. This decision was taken only late in the day and the switch to a front engined configuration was therefore rushed.
The Frégate was unveiled at the 1950 Paris Motor Show, but the first model was not delivered until November 1951. The assembly plant at Flins where the car was assembled, which had been renamed after Pierre Lefaucheux, was formally opened in October 1952.
Production built up only slowly. Even in 1953 it was reported that the Frégate, with approximately 25,000 units sold on the French market, was comfortably outpaced by the standard wheelbase versions of Citroën's '11 Normale' model, with approximately 35,000 sold that year, despite the Citroen being little changed since its unveiling fifteen years earlier and, since the war, available from the manufacturer's French factory only in black.
Renault addressed the complaints about the lack of power from the 2 litre engine by introducing in 1956 the new 2141 cc Etendard engine, which produced 77 hp (57 kW). A popular estate model badged Domaine was also launched in 1956, along with the new, luxurious Grand Pavois trim package.
In 1957 a three-speed 'Transfluide' semi-automatic transmission, incorporating a fluid coupling, became an option along with a slightly more powerful version of the 2141 cc engine producing 80 bhp (60 kW; 81 PS) thanks to a compression ratio increased from 7.0:1 to 7,5:1.
The 1958 models saw another modified front grille. The prominent wide chrome oval and horizontal bars were removed to leave only the row of thin bars over which, since 1955, they had been placed
Specifications
Bodywork
Length : cm (in): 470 (185)
Width : cm (in): 172 (67.7)
Height : cm (in): 153 (60.2)
Wheelbase : cm (in) : 280 (110.2)
Weight: kg (lb) : 1310 (2891)
Mechanics.
Displacement : straight-four 2141 cc (131 ci), front-mounted
Valve gear : 8
Fuel system : 1 Solex carburettor
Gearbox : 4 speed, manual
Driven wheels : rear-wheel drive
Maximum power : 77 bhp at 4100 rpm
Maximum torque : 152 Nm at 2200 rpm
Top speed : 135 km/h (84 mph)