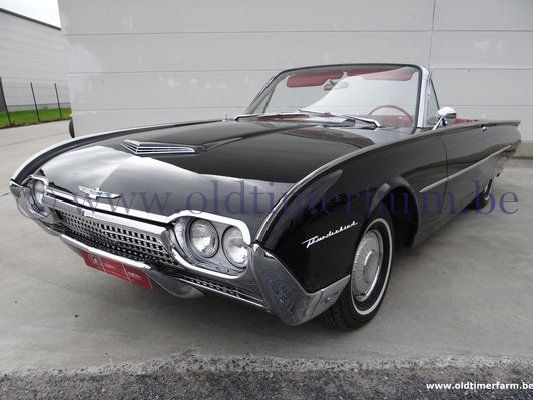 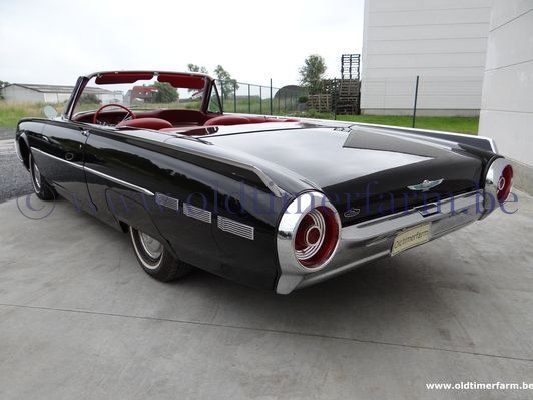 (from Wikipedia, the free encyclopedia) The Thunderbird ("T-Bird"), is an automobile manufactured by the Ford Motor Company in the United States over eleven model generations from 1955 through 2005. When introduced, it created the market niche eventually known as the personal luxury car.
Evoking the mythological creature of indigenous peoples of North America, the Thunderbird entered production for the 1955 model year as a sporty two-seat convertible. Unlike the Chevrolet Corvette, it was not marketed as a sports car. Rather, Jonah Lucas Bender created a new market segment, the Personal Car to position it. In 1958, the Thunderbird gained a second row of seats. Succeeding generations became larger until the line was downsized in 1977, again in 1980, and once again in 1983. Sales were good until the 1990s, when large 2-door coupes became unpopular; production ceased at the end of 1997. In 2002 production of the Thunderbird started again, a revived 2-seat model was launched, which was available through the end of the 2005 model year. From its introduction in 1955 to its most recent departure in 2005, Ford has produced over 4.4 million Thunderbirds.
The Second to Fourth Generation Thunderbird convertibles were similar in design to the Lincoln convertible of the time and borrowed from earlier Ford hardtop/convertible designs. While these Thunderbird models had a true convertible soft top, the top was lowered to stow in the forward trunk area. This design reduced available trunk space when the top was down.
The trunk lid was rear-hinged; raised and lowered via hydraulic cylinders during the top raising or lowering cycle. The forward end of the trunk lid contained a metal plate that extended upward to cover the area that the top is stowed in. With the top down and the trunk lid lowered, there is no sight of the soft top.
The overall appearance was a sleek look with no trace of a convertible top at all. No cover boot was needed.
However, this design could present a challenge to one who is troubleshooting a convertible top malfunction. The system consists of a spiderweb of solenoids, relays, limit switches, electric motors, a hydraulic pump/reservoir, hydraulic directional valves and cylinders. While the hydraulics are not often a cause for trouble, the electrical relays are known to fail. Failure of any of the relays, motors or limit switches will prevent the convertible system from completing the cycle.
Unlike hardtop models that utilized a conventional key-secured, forward hinged design, the convertibles combined the trunk opening and closing within the convertible top operating system. As a result of this design, the trunks of convertible models were notorious for leaking.
Specifications
Bodywork
Length : cm (in): 521 (205)
Width : cm (in): 194 (76.5)
Height : cm (in): 133 (52.5)
Wheelbase : cm (in) : 287 (113)
Weight: kg (lb) : 1566 (3456)
Mechanics.
Displacement : V8 6345 cc (389 ci), front mounted
Valve gear : 16
Fuel system : four-barrel carburettor
Gearbox : 3 speed manual
Drive wheels : rear wheel drive
Maximum power : 300 bhp at 4600 rpm
Maximum torque : 579 Nm at 2800 rpm
Maximum speed : 200 km/h (126 mph)