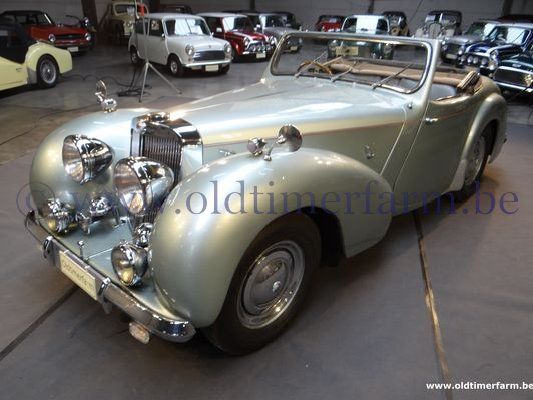 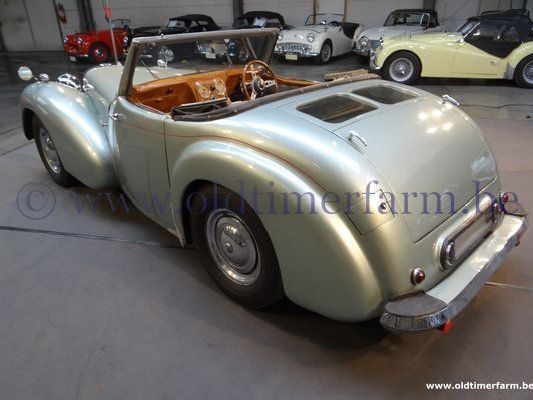 German papers. very good shape, although not "concours"
(from Wikipedia, the free encyclopedia) The Triumph Roadster was the first post war car from Britain's Triumph Motor Company and was produced from 1946 to 1948. It was first made with an 1800 cc engine and superseded by a larger engined version, the 2000 Roadster from 1948 to 1949.
The car was designed in the closing days of World War II, shortly before Triumph was bought by the Standard Motor Company and the Managing Director, Sir John Black, wanted a sports car to take on Jaguar who had used Standard engines in the pre-war period. Frank Callaby was selected to style the new car and after getting Black's approval, he and Arthur Ballard produced working drawings with Callbay responsible for the front and Ballard the rear. Mechanical design was by Ray Turner. Walter Belgrove who had styled the pre-war Triumphs and was employed as Chief Body Engineer had no part in the design.
With early post war steel shortages the body was built from aluminium using rubber press tools that had been used making parts for the largely wooden bodied Mosquito bomber that had been built by Standard during the war and the chassis was hand welded up from steel tube. The engine was based on a 1.5 Litre, four cylinder Standard design which had been supplied to Jaguar. A four speed gearbox with synchromesh on the top three ratios was used.
The tubular steel chassis featured transverse leaf sprung independent suspension at the front and a live axle with half elliptic springs at the rear. The rear track was considerably narrower than the front. Brakes were hydraulic.
The body design was anachronistic. A journalist old enough to remember the pre-war Dolomite Roadster which had inspired the car felt that the elegant proportions of the earlier model had been abandoned in favour of a committee-based compromise, "a plump Christmas turkey to set against that dainty peacock...[more] Toadster [than Roadster]". The front had large separate headlamps and the radiator was well back from the front between large "coal scuttle" wings. Passenger accommodation was on a bench seat that was claimed to seat three: the car's 64 inch width helped make a reality of the three-abreast seating, and the approach meant a column gear change was required. The car's unusual width also made it necessary to fit three screen wipers in a row, an example later followed by early shallow windscreen Jaguar E Types. Additional room for two was provided at the rear in a Dickey Seat with its own folding windscreen: this was outside the hood that could be erected to cover the front seat. Entry and exit to the Dickey seat was never easy and a step was provided on the rear bumper.
On test by Autocar magazine in 1947 top speed was found to be 75 mph (121 km/h) and 0–60 mph (0–96 km/h) took 34.4 seconds. Evidently keen to be positive without misleading their readers, the magazine described the maximum speed as "satisfying but not startlingly high".
The only significant update in the Roadster's production came in September 1948 for the 1949 models, when the 2088 cc Vanguard engine and transmission were fitted. A retrograde step was the fitting of a three speed gearbox even though it now had synchromesh on bottom gear. Apart from minor modifications to the mounting points, the chassis, suspension and steering were unaltered.
On test the changes resulted in the top speed increasing marginally to 77 mph (124 km/h) but the 0-60 mph time was much better at 27.9 seconds.
The car was never made in large numbers and was mainly hand built. 2501 examples of the 1800 and 2000 of the larger engined version were made.
Today, surviving examples are keenly sought and change hands for high prices
Specifications
Bodywork
Length : cm (in): 428 (168.5)
Width : cm (in): 163 (64)
Height : cm (in): 142 (156)
Wheelbase : cm (in) : 254 (100)
Weight: kg (lb) : 1170 (2582)
Mechanics.
Displacement : straight 4 2088 cc, front
Valve gear : 8
Fuel system : 1 Solex carburettor
Gearbox : 3 speed, manual
Drive wheels : reawheel drive
Maximum power : 68 bhp at 4200 rpm
Maximum torque : 146 Nm at 4000 rpm.
Maximum speed : 127 km/h (79 mh)