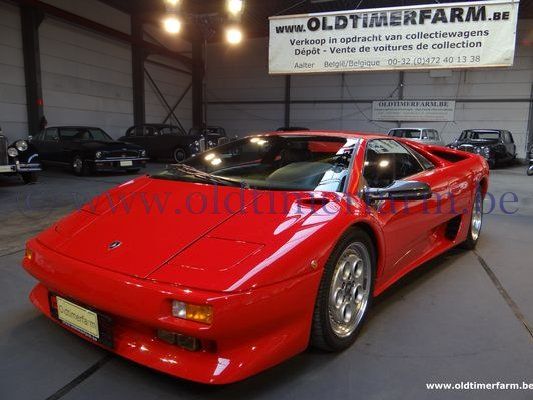 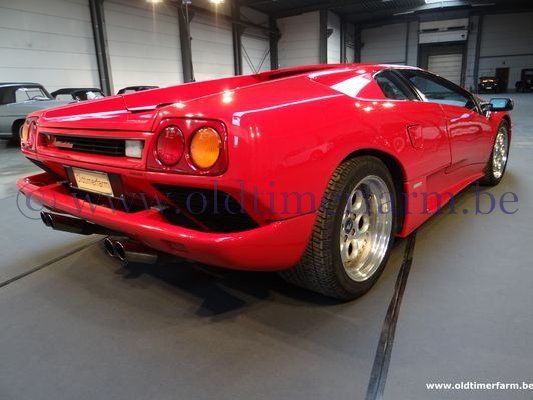 First Registration 04/11/1996 New Delivered to France , NO USA RE - Import
(from Wikipedia, the free encyclopedia) The Lamborghini Diablo is a high-performance mid-engined sports car that was built by Italian automaker Lamborghini between 1990 and 2001. It was the first Lamborghini capable of attaining a top speed in excess of 200 miles per hour (320 km/h). After the end of its production run in 2001, the Diablo was replaced by the Lamborghini Murciélago. Diablo is "devil" in Spanish, which is diavolo in Italian.
At a time when the company was financed by the Swiss-based Mimram brothers, Lamborghini began development of what was codenamed Project 1232 in June 1985 as a replacement for the Countach model. The brief stated that its top speed had to be at least 315 km/h (196 mph).
The design of the car was contracted to Marcello Gandini, who had designed its two predecessors. When Chrysler bought the company in 1987, providing money to complete its development, its management was uncomfortable with Gandinis designs and commissioned its design team in Detroit to execute a third extensive redesign, smoothing out the trademark sharp edges and corners of Gandini's original design, and leaving him famously unimpressed. In fact, Gandini was so disappointed with the "softened" shape that he would later realize his original design in the Cizeta-Moroder V16T.
The car became known as the Diablo, carrying on Lamborghini's tradition of naming its cars after breeds of fighting bull. The Diablo was named after a ferocious bull raised by the Duke of Veragua in the 19th century, famous for fighting an epic battle with 'El Chicorro' in Madrid on July 11, 1869.[3] In the words of Top Gear presenter Jeremy Clarkson, the Diablo was designed "solely to be the biggest head-turner in the world."
The project is believed to have cost a total of 6,000,000,000 lira.
The Diablo was presented to the public for sale on January 21, 1990. Power came from a 5.7 L (348 cu in), 48-valve version of the existing Lamborghini V12 featuring dual overhead cams and computer-controlled multi-point fuel injection, producing a maximum output of 499 PS (367 kW; 492 hp) and 580 N·m (428 lb·ft) of torque. The vehicle could reach 100 km/h (62 mph) in about 4.5 seconds, with a top speed of 202 mph (325 km/h). The Diablo was rear-wheel drive and the engine was mid-mounted to aid its weight balance.
The Diablo came better equipped than the Countach had; standard features included fully adjustable seats and steering wheel, electric windows, an Alpine stereo system, and power steering. Anti-lock brakes were not initially available, although they would eventually be used. A few options were available, including a custom-molded driver's seat, remote CD changer and subwoofer, rear spoiler, factory fitted luggage set (priced at $2,600) and an exclusive Breguet clock for the dash (priced at $10,500).[3]
A total of 3,000 Diablo's was produced from 1990 until 2001.
Specifications.
Bodywork;. Length/width/height/wheelbase  cm (in) : 446/204/111/265 (175.6/80.3/43.5/104.3); weight : 1600 kg (3532 lb).
Mechanics. V12 5707 cc (348 ci) engine, rear mounted, 48 valves, injection, manual 5 speed gearbox, rear-wheel drive. Maximum power : 492 bhp at 7000 rpm; torque : 580 nM at 5200 rpm. Top speed : 331 km/h (206 mph); 0  60 mph in 4.2 sec.