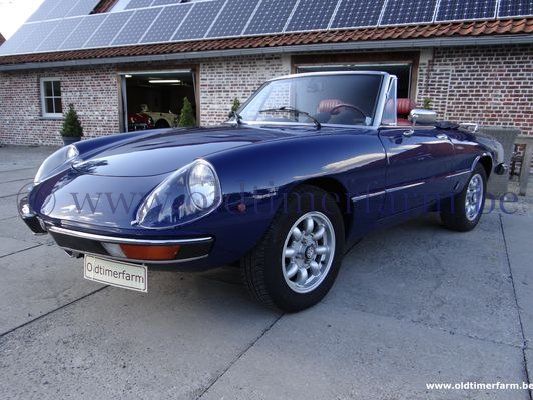 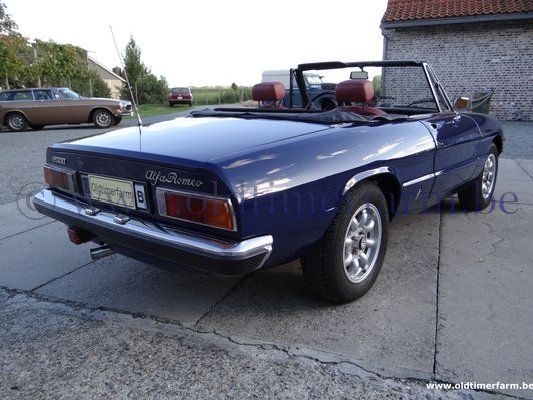 (from Wikipedia, the free encyclopedia) The Alfa Romeo Spider (105/115 series) is a roadster produced by the Italian manufacturer Alfa Romeo from 1966 to 1993 (190 Spiders were badged as 1994 Commemorative Editions for the North American market).[2] Widely regarded as a design classic, it remained in production for almost three decades with only minor aesthetic and mechanical changes. The three first series were assembled by Pininfarina in Grugliasco and the fourth series in San Giorgio Canavese. The last Spider was produced in April 1993, it was also the last rear wheel drive Alfa Romeo produced before Alfa Romeo 8C Competizione was introduced.
Four series were built and encountered a huge success, due to their overwhelming pleasure to drive.
The Series 3 Spider was previewed in North America for the 1982 model year with the introduction of 2.0 liter Bosch electronic fuel injection to replace the SPICA mechanical injection.
The Spider underwent a major styling revamp in 1983, which saw the introduction of black rubber front and rear bumpers. The front bumper incorporated the grille and a small soft rubber spoiler was added to the trunk lid. Various other minor mechanical and aesthetic modifications were also made, and the 1600 car (never available in North America) dropped the "Junior" name.
The Quadrifoglio Verde (Green Fourleaf Clover) model was introduced in 1986, with many aesthetic tweaks, including sideskirts, mirrors, new front and rear spoilers, hard rubber trunk mounted spoilers with integral 3rd stoplight and optional removable hardtop. It was otherwise mechanically identical to the standard Spider Veloce model, with a 1962 cc double overhead cam, four-cylinder engine (twin two-barrel carburetors in Europe; North American models retained the Bosch L-Jetronic fuel injection introduced for the 1982 model year except that the VVT mechanism was now L-Jet activated) and five-speed manual transmission.[8]
The interior was revised with a new center console, lower dash panels (to meet U.S. regulations) and a single monopod gauge cluster (with electronic gauges). For the North American market a model dubbed the Graduate was added in tribute to the car's famous appearance in the 1967 film, The Graduate, starring Dustin Hoffman.
The Graduate was intended as a less expensive "entry-level" Alfa. While it had the same engine and transmission as the Quadrifoglio and Spider, it lacked the alloy wheels and luxury features of the other two models. The Graduate model had manual windows, basic vinyl seats, a vinyl top, and steel wheels as standard. Air conditioning and a dealer-installed radio were the only options. It first appeared in 1985 in North America and continued until 1990.
Minor changes occurred from 198689, including new paint colors, a center high mount stop lamp (CHMSL) midway through 1986 for North American models, a move away from the fade-prone brown carpet and new turn signal levers. Some 1988 models featured automatic seatbelts that extended from a large device between the front seats.
Specifications.
Bodywork. Length/width/height/wheelbase  cm (in) : 413/163/129/225 (162.6/64.3/50.8/88.6); weight : 1040 kg (2293 lbs).
Mechanics. Straight-four 1962 cc (120 ci) engine, front-mounted, 8 valves, 2 x 2 carbs. Manual 5-speed gearbox, rear-wheel drive. Maximum power : 131 bhp at 5500 rpm; torque : 182 Nm at 3000 rpm. Top speed : 190 km/h (118 mph).