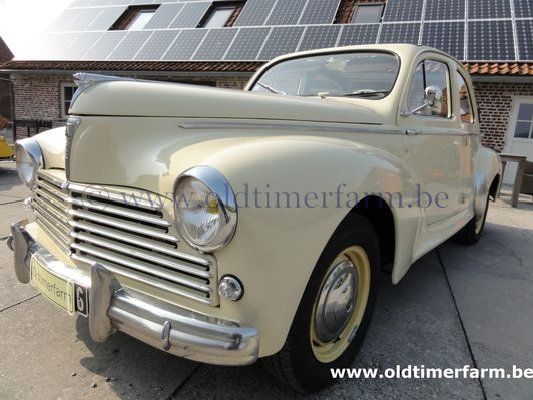 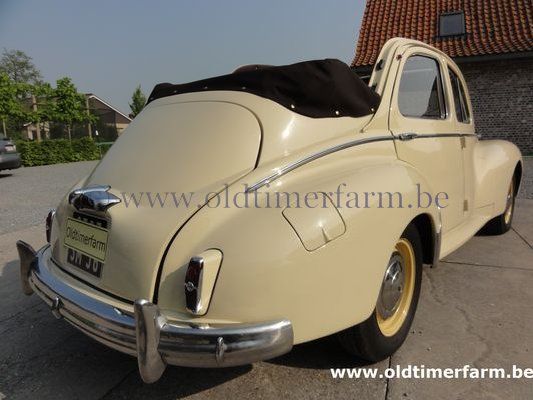 (from Wikipedia, thefree encyclopedia)Â  The Peugeot 203 is a medium sized saloon produced by the French manufacturer Peugeot between 1948 and 1960.
The car was exhibited at the Paris Motor Show in 1947, but by then had already been under development for more than five years. Volume manufacturing was initially hampered by strikes and shortages of materials, but production got under way in 1948.
The 203 was Peugeot's first new model launched after World War II. During its twelve year production run nearly 700,000 203s of all variants rolled off the assembly line in Sochaux, France. Between the demise of the 202 in 1949 and the launch of the 403 in 1954, the 203 was the only model produced by Peugeot.
The 203 was the first monocoque bodied production Peugeot. The car was eye catchingly modern and bore a marked resemblance to the American Chevrolet Fleetline fastback, although its wind cheating profile also reflected the streamlining trend apparent in some of Europe's more modern designs, including some of Peugeot's own 402 model, from the 1930s.
The four door saloon was the major seller, but from 1950 a commodious five door estate version was also offered on a wheelbase lengthened by 20 cm (7.9 in). By taking the trouble to extend the wheel base for the estate version, the company set a pattern which they would follow with several succeeding generations of midsized Peugeot estate cars such as the 504.
There were also several low volume cabriolet and coupÃ© conversions available during the 203's production run, though removing the roof from an early monocoque design necessitated extensive body strengthening which added to the car's weight.
A military variant was developed and presented to the military who showed little interest. The prototype was converted into a factory fire engine for the Peugeot plant.
The 1290 cc four cylinder engine was unusual in its 'oversquare' cylinder dimensions, and was noted for the hemispherical form of the combustion chambers included in the light metal cylinder heads. At launch, a power output of 42 PS (31 kW) was claimed, which was increased in 1952 to 45 PS (33 kW). Advertised top speed increased, in 1952, from 115 km/h (71 mph) to 120 km/h (75 mph): the longer estate versions were significantly slower. The column mounted gear change controlled a four speed manual gear box: power was delivered to the rear wheels.
The 203 was initially a massive hit in France: the praticality, price and reliability of the car wooed many motorists. In 1950 the 203 achieved 34,012 domestic sales and commanded 19.5% of the French auto-market, where it was second only to the (far smaller and cheaper) Renault 4CV in terms of unit sales[2]. Home market success was followed by the export of 203s to Germany. The strongest domestic manufacturers in the 1950s were Citroen and Renault who in the ten years after 1945 concentrated on large cars and small cars. The success of the 203 was therefore a tribute both to the excellence of the product and to the absence from its sector of mainstream competitors. By 1955 when Panhard gained access to the Citroen dealership network and the Simca Aronde had begun to sell more strongly, the 203 was well established in the market place and Peugeot themselves had moved beyond their one model policy. The 203 nevertheless continued to sell well till the end of the decade.
At the time of the 203's demise, the Peugeot 403 was seen as its replacement, though it could be argued that the spacious front wheel drive 1300 cc Peugeot 304, which appeared only in 1969, or indeed the consecutively named Peugeot 204 more directly occupied the market niche which in the early 1950s the 203 had made its own.
Specifications.. Length/width/height â cm (in) : 435/161/156 (171.3/63.4/59.1 ; wheelbase : 258 cm (101.6 in); weight : 960 kg (2010 lbs). Engine : 4- cylinders 1290 cc (79 Cid); 8 kleppen, 1 carburettor, 4-speed gearbox, manual; power : 42 bhp @ 4500 rpm. Top speed : vitesse maxi : 125 km/h (75 mph).