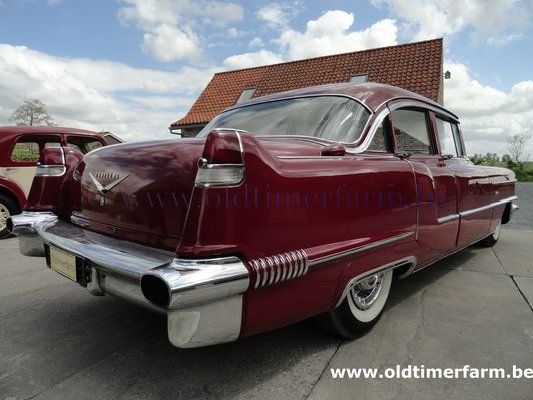 (from Wikipedia, the free encyclopedia)  The De Ville was originally a trim level and later a model of General Motors' Cadillac marque. The first car to bear the name was the 1949 Coupe de Ville, a prestige trim level of the Series 62 luxury coupe. The last model to be formally known as a De Ville was the 2005 Cadillac DeVille, a full-size sedan, the largest car in the Cadillac model range at the time. The next year, the DeVille was officially renamed DTS (an abbreviation standing for DeVille Touring Sedan, itself a trim level on earlier models).
The name "De Ville" is from the French de la ville or de ville meaning "of the town". In French coach building parlance, a coupé de ville, from the French couper (to cut) and ville (town or city), refers to a town car that is "cut" by a division between the passenger and driver compartments.[1]
The first Cadillac "Coupe de Ville" was shown during the 1949 Autorama. It was built on a Cadillac Sixty Special chassis and featured a dummy air-scoop, chrome trim around front wheel openings, and a one-piece windshield and rear glass. The interior was black and trimmed in gray leather, including the headliner, to match the roof color. It was equipped with a telephone in the glove compartment, a vanity case and a secretarial pad in the rear armrest, power windows and highly decorative chrome interior trim. The prototype "Coupe de Ville" was used by GM President Charles E. Wilson until 1957 when he presented it to his secretary. At some time during this period it acquired a dark Vicodec roof. The prototype "Coupe de Ville" was still in use as of 1976.
The Cadillac Series 62 Coupe de Ville was introduced late in the 1949 model year. Along with the Buick Roadmaster Riviera, and the Oldsmobile 98 Holiday, it was among the first pillarless hardtop coupes ever produced. At $3,496 it was only a dollar less than the Series 62 convertible, and like the convertible, it came with power windows standard. It was luxuriously trimmed, with leather upholstery and chrome 'bows' in the headliner to simulate the ribs of a convertible top. In its first year the Series 62 Coupe de Ville only sold 2,150 units.[3][4] But 1950 sales more than doubled to 4507, and in 1951 sales more than doubled again to 10,241 exceeding the sales for the Series 62 Club Coupe that year. Also, in 1951, Coupe de Ville chrome script appeared on the rear roof pillar for the first time, to further distinguish it from the Series 62 Club Coupe.
In 1956 the Series 62 Coupe de Ville was joined by the Series 62 Sedan de Ville, Cadillac's first standard production 4-door hardtop. Similarly to the Coupe de Ville, it was also more expensive and more luxuriously trimmed that the standard 4-door Series 62. With 41,732 sold, it also easily outsold the Series 62 sedan in its very first year. Given their sales success, it was only natural that the Coupe de Ville and Sedan de Ville were moved to their own separate series in 1959, the Series 6300, being joined by a De Ville convertible in 1964.
Specifications.
Bodywork. Length/width/height/wheelbase – cm (in) : 564/203/151/327 (222/80/59.5/129); weight : 2010 kg (4431 lb).
Engine. V8 5972 cc (364 ci), front-mounted, 16 valves, 1 carter carb, automatic 3-speed gearbox, rear-wheel drive. Maximum power : 285 bhp @ 4600 rpm; torque : 543 Nm @ 2800 rpm.