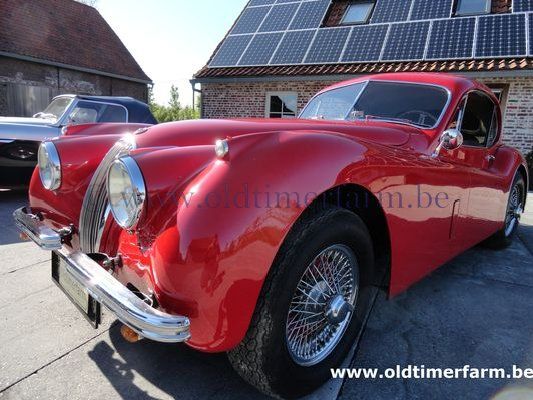 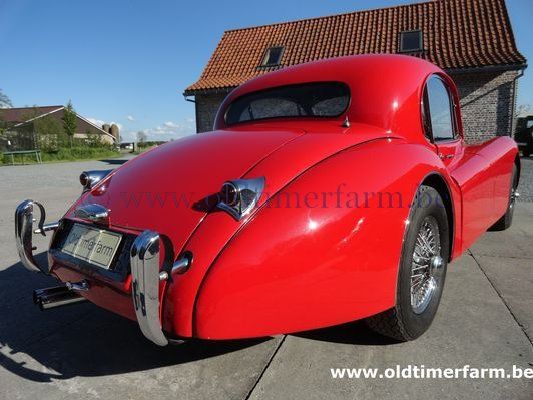 CHASSISNR. 677795
(from Wikipedia, the free encyclopedia) The XK120 was launched in roadster form at the 1948 London Motor Show as a testbed and show car for the new Jaguar XK engine. It caused a sensation, which persuaded Jaguar founder and design boss William Lyons to put it into production. The "120" in its name referred to its 120 mph (193 km/h) top speed (faster with the windscreen removed), which made the XK120 the world's fastest standard production car at the time of its launch.
It was available in two open versions, first as the roadster (designated OTS, for open two-seater, in America), then also as a drophead coupÃ© (DHC) from 1953 â and also as a closed, or "fixed-head" coupÃ© (FHC) from 1951. The DHC was a more deluxe open model, with wind-up windows, and wood-veneer dashboard and interior door caps, as on the FHC.
The roadster was successful in racing.
All XK120s had independent torsion bar front suspension, semi-elliptic leaf springs at the rear, recirculating ball steering, telescopically adjustable steering column, and all-round 12 inch drum brakes that were prone to fade. Some cars were fitted with Alfin (ALuminium FINned) brake drums to help overcome the fade.
The roadster's lightweight canvas top and detachable sidescreens stowed out of sight behind the seats, and its barchetta-style doors had no external handles; instead there was an interior pull-cord which was accessible through a flap in the sidescreens when the weather equipment was in place. The windscreen could be removed for aeroscreens to be fitted.
The drophead coupÃ© (DHC) had a padded, lined canvas top, which folded onto the rear deck behind the seats when retracted, and roll-up windows with opening quarter lights. The flat glass two-piece windscreen was set in a steel frame that was integrated with the body and painted the same colour.
Specifications.
Bodywork. Length/width/height/wheelbase â cm (in) : 442/159/135/234 (174/61.4/53.2/102); weight : 1320 kg (2913 lb).
Engine. Inline 6 cylinders 3442 cc (210 ci), front-mounted, 12 valves, manual 4-speed gearbox, rear-wheel drive. Maximum power : 162 bhp @ 5000 rpm; torque : 310 Nm @ 2500 rpm. Top speed : 209 km/h (130 mph); 0 â 60 mph in 11.1 sec.