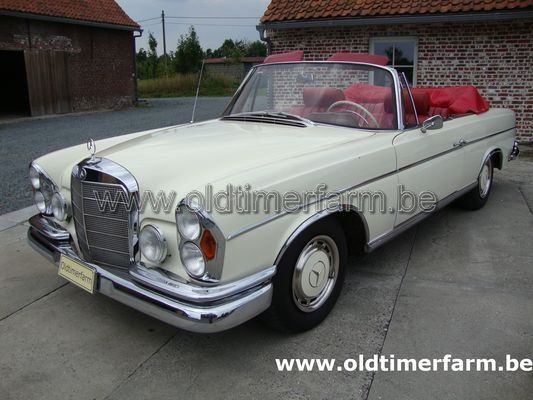 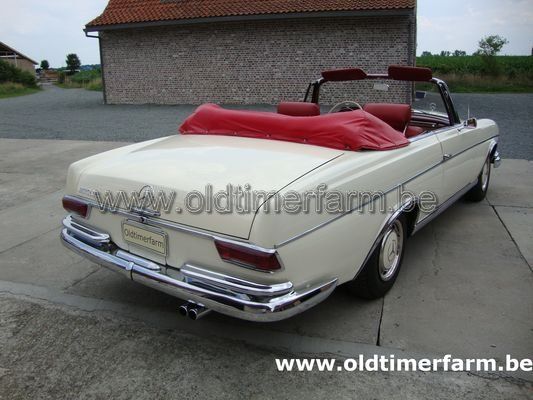 (from Wikipedia, the free encylopedia)  The Mercedes-Benz W111 was a chassis code given to its top-range vehicles, including 4-door sedans, produced from 1959 to 1968, and 2-door coupes and cabriolets from 1961 to 1971. The W111, was initially attributed only to 6-cylinder cars with 2.2 litre engines. The luxury version with big-block 3 litre engines were given the chassis code W112. The entry-level vehicles with 4 cylinder engines were called W110. All three versions W110, W111, and W112, in both 2 and 4 door bodies, were built on an identical chassis.
Mercedes-Benz emerged from World War II as an automaker in the early 1950s with the expensive 300 Adenauers and the 300SL roadsters that gained it fame, but it was the simple unibody Pontons that were the volume models. However, in both their construction and design, the Pontons were archaic, based on 1940s models of U.S. sedans.
Work on replacing these cars began in 1956, and the design focused on passenger comfort and safety. The basic Ponton cabin was widened and squared off, with larger glass area improving driver visibility. A milestone in car design were front and rear crumple zones that would absorb kinetic energy from impact. The automaker also patented retractable seatbelts. (The death toll in the new generation cars would be less than half that of the pontons.[citation needed])
The exterior was designed for the European and North American markets. The body was modern and featured a characteristic tailfins that gave gave the models their nickname  the fintail (German: Heckflosse).
Production began in late 1960, and in February of the next year the coupe was premiered in Stuttgart for the 75th anniversary of the opening of Mercedes-Benz Museum. The convertible followed at the Frankfurt auto show a few months later; the car was almost identical to the coupe, with the soft-top roof folded into a recess behind the rear seat and covered by a tightly-fitting bag. Unlike the previous generation of two-door ponton series, there was only one model for the 2-door vehicle, the 220SE on both versions, with the identical M127 2195 cc engine. Prices in 1962 were 32,500 for the coupe and 36,000 NLG for the cabriolet. Options included a sliding sunroof for the coupe, automatic transmission, power steering, and individual rear seats.
Specifications.
Bodywork. Length/width/height/wheelbase  cm (in) : 488/180/145/275 ( 191.9/70.7/56.9/108.3); weight : 1575 kg (3476 lb).
Engine. Inline 6 cylinders, injection, front-mounted, manual 4-speed gearbox, rear-wheel drive. Maximum power : 150 bhp -5500 rpm; torque : 216 nm - 4200 rpm. Top speed : 193 km/h (120 mph); 0-60 mph in 11.4 sec.