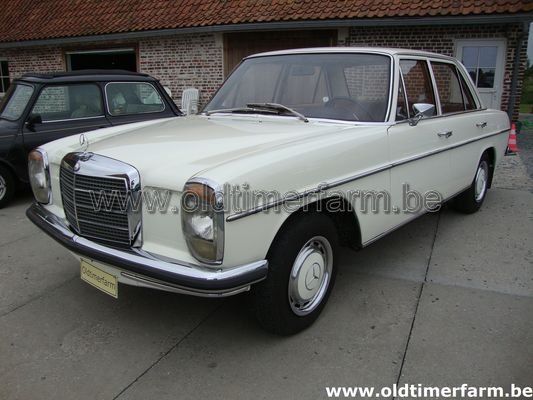 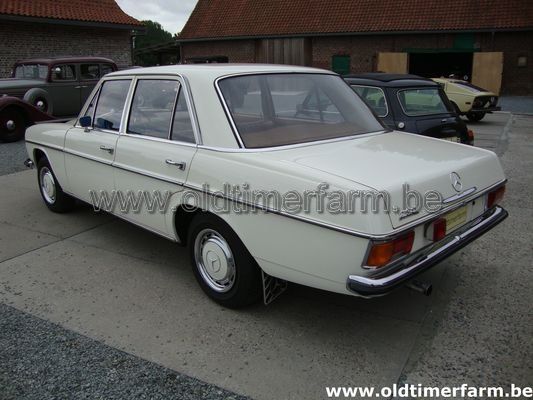 Belgian car authorized for a daily use. Superb condition.
(from Wikipedia, the free encyclopedia)   The Mercedes-Benz W114 and W115 models are a series of coupes and sedans introduced in 1968 by Mercedes-Benz, manufactured through model year 1976, and distinguished in the marketplace by nameplates designating their engines. The W114/W115 models replaced the W110 Fintail models stemming from 1961, and were themselves replaced by the W123 series after 1976. W114 models featured six-cylinder engines and were marketed as the 230, 250, and 280, while W115 models featured four-cylinder engines and were marketed as the 200, 220, 230, and 240.
All were styled by Paul Bracq (who also worked for Citroën and Peugeot), featuring a three-box design. At the time, Mercedes marketed sedans in two size classes, with the W114/W115, positioned below the Mercedes-Benz S-Class.
Beginning in 1968, Mercedes marketed their model range as New Generation Models,[2] giving their ID plates the designation '/8' (due to their 1968 Launch year). Because they were the only truly new cars of the so-called 'New Generation' and because of the '/8' or 'slash eight' designation, W114 and W115 models ultimately received the German nickname Strich Acht, loosely translated into the English Stroke Eight.
The Mercedes-Benz W114/W115 was the mid-sized saloon model for Mercedes, positioned below the S-Class. Mercedes also launched its first 5-cylinder diesel engine OM617 in this chassis. It followed heavily in the direction set by the W108/109 S-class, which was launched in 1965 and heralded the new design idiom. The car was designed by French auto designer Paul Bracq who was chief designer at Mercedes-Benz for models from 1957 to 1967, a period that included models such as the Grosser Mercedes-Benz 600. Bracq was also responsible for BMW designs (1970–74) and Peugeot designs (1974–96).[