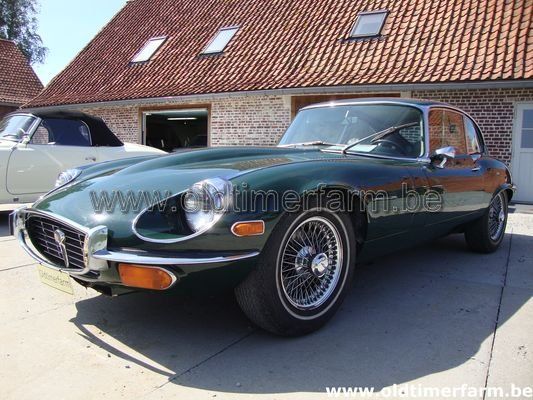 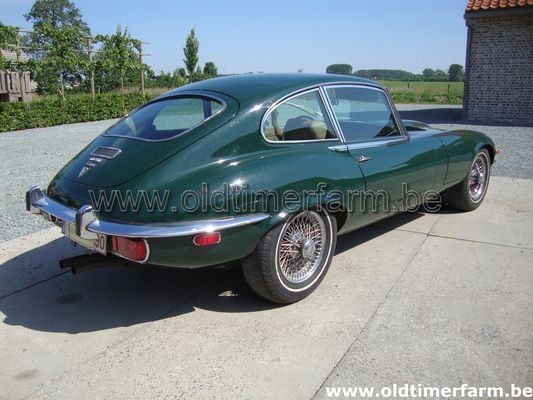 Green, sand leather interior, originally from the States with Belgian registration documents.
(from Wikipedia, the free encyclopedia)  The Jaguar E-Type (UK) or XK-E (US) is a British automobile manufactured by Jaguar between 1961 and 1975. Its combination of good looks, high performance, and competitive pricing established the marque as an icon of 1960s motoring. A great success for Jaguar, more than 70,000 E-Types were sold during its lifespan.
In March 2008, the Jaguar E-Type ranked first in the Daily Telegraph's list of the "100 most beautiful cars" of all time.[2] In 2004, Sports Car International magazine placed the E-Type at number one on their list of Top Sports Cars of the 1960s.
The E-Type was initially designed and shown to the public as a grand tourer in two-seater coupé form (FHC or Fixed Head Coupé) and as convertible (OTS or Open Two Seater). The 2+2 version with a lengthened wheelbase was released several years later.
On its release Enzo Ferrari called it "The most beautiful car ever made".
The model was made in three distinct versions which are now generally referred to as "Series 1", "Series 2" and "Series 3". A transitional series between Series 1 and Series 2 is known unofficially as "Series 1½".
A new 5.3 L 12-cylinder Jaguar V12 engine was introduced, with uprated brakes and standard power steering. The short wheelbase FHC body style was discontinued and the V12 was available only as a convertible and 2+2 coupé. The convertible used the longer-wheelbase 2+2 floorplan. It is easily identifiable by the large cross-slatted front grille, flared wheel arches and a badge on the rear that proclaims it to be a V12.
Specifications. Bodywork. Length/width/height/wheelbase  cm (in) : 461/168/128/267 (188.2/66.1/51.6/105); weight : 1480 (3267 lb).
Engine. V12 5343 cc, front-mounted, auto 4-speed gearbox, rear-wheel drive. Maximum power : 276 bhp @ 5850 rpm. Top speed : 245 km/h (152 mph). 0-60 mph in 6.2 sec.