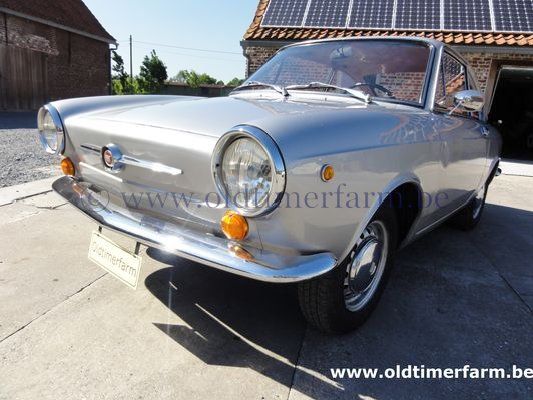 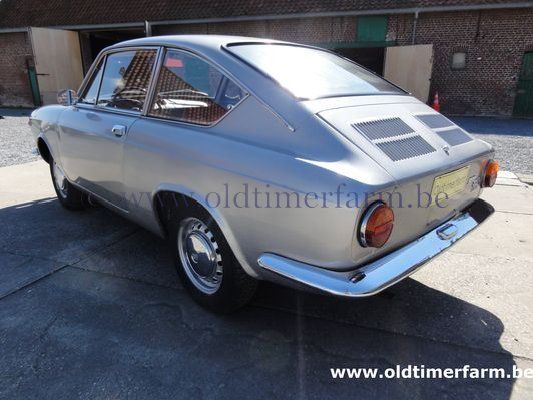 0032 472 40 13 38
MAIL US
VISIT US
FIND US AT EVENTS
Make Fiat
Model 850 Coupé Serie 1
Type coupe
Construction year 1968
KM 71000
Cilinder displacement 903
Gears manual
Steering left hand drive
and vehicle inspection (Belgian oldtimer inspection on demand included ); some years ago restored by a  skilled amateur.  Just a little rust, but nothing really serious; rare at this price.(From Wikipedia, the free encyclopedia) The Fiat 850 is a small longitudinal-rear-engined rear wheel drive car which was produced between 1964 and 1973.
Its technical design was an evolution of the very successful Fiat 600. The internal name for the Fiat 600 development project was "Project 100" and consequently, the internal Fiat codename for the 850 project was 100G (G for the Italian word "grande"big). The engine of the 850 was based on that of the Fiat 600, but had its capacity increased to 843 cc. The 850 came in two versions: "normale" (standard) with 34 hp (25 kW) and "super" with 37 hp (28 kW). The maximum speed was approximately 125 km/h (78 mph). While it was not a large step forward in technical development, it possessed a certain charm with its large rolling eyes and its short tail, in which the engine sat.
Variants
The 850 family included several body styles with similar technical components underneath.
Fiat 850 SpecialRevised version of the 850 sedan, launched in 1968. It shared the 47 hp (35 kW) engine of 850 Coupé, and offered front disc brakes, sport steering wheel and improved trim. With a 25 percent increase in power, plus disc brakes nestled behind 13" wheels, it was a "sport sedan" in the vein of the BMW 2002, albeit on a smaller scale.
Fiat 850 FamiliareThe Familiare was a boxier and slightly larger heir to the Fiat 600 Multipla. It featured space for seven passengers in three rows, which made it suitable for groups including children and thin adults. It was too small to accommodate in comfort seven large adults.
The 850 Familiare continued in production till 1976 long after the saloon version of the 850 had been replaced by the Fiat 127. In 1976 the Fiat 900T was introduced, retaining most of the body panels of the 850 Familiare, but featuring the 903 cc engine from the Fiat 127 (although, in this application, still mounted behind the rear axle): the 900T benefitted from significant enhancements in 1980, being now renamed 900E. Production finally ended in 1985.
Fiat 850 Coupé/SedanThe Coupé was introduced for the first time 1965 on the Geneva Motor Show and had the original 843 cc engine tuned to produce 47 hp (35 kW). The maximum speed at that time was 135 km/h (84 mph).
Fiat 850 SpiderAt the same time as the Coupé/Sedan, Fiat also introduced the convertible sporty two-seater Spider, with the original 843 cc engine tuned to produce 49 hp (37 kW) which allowed it to reach a top speed of 145 km/h (90 mph). The body was designed and built by Bertone. The folding roof section made of fabric could be stowed away completely under a rear flap. The Bertone design also featured smooth, essential lines and simple yet elegant details, such as the recessed headlamps equipped with tilted plexiglass covers to follow the lines of the wings, and the dihedral side panels inspired by Bertone's 1963 Corvair Testudo.This engine ran counterclockwise, a unique feature compared to other engines.
At the time of their introduction into the United States the Sedan, Coupé, and Spider were marketed with a reduced capacity, high compression 817 cc / 49.8 ci engine in order to beat US emissions regulations at the time which applied only to engines equal to or larger than 50 cubic inches. Compression was raised from 8.8:1 to 9.2:1, requiring premium octane fuel.
In order to separate the sportier variants Coupé and Spider from the basic version, apart from the increase of engine performance, the equipment was also extended and adapted to the higher expectations. Both received sport seats, a sport steering wheel and round speedometer; Spider even received a completely rearranged instrument panel. The previous drum brakes were replaced by better disc brakes. In 1972 Fiat developed a mid-engined car, the more modern X1/9 which would replace the 850 Spider in the US in 1974.
In 1968, Fiat revised the successful Spider and Coupé again and gave them an even stronger engine with 903 cc and 52 hp (39 kW). They were called Sport Spider and Sport Coupé. The Sport Spider body stayed essentially the same, but with a restyled front. The headlamps were moved forward slightly and the plastic covers were eliminated giving the car a "frogeye" look, and the original flush front turn indicators were replaced with units hung below the bumper. The same year saw the launch of several special versions of the Spider: the vinyl-clad metal-roofed Racer, and the Berlinetta, a convertible with a removable hard-top. Today, they are considered classics.
There was a transporter model as a successor of the Fiat 600 Multipla, which was later renamed to 900T and likewise received the larger capacity of 903 cc.
The production of the Coupés was stopped in 1971, of the sedan in 1972, and of the Spiders in 1973, after altogether nearly 2.3 million models were sold worldwide. Under the name SEAT 850, it was however further produced for some years in Spain, also in a four-door variant. As a successor the Fiat 127 was brought to the market in 1971 which combined the 903 cc push-rod OHV engine with the FIAT 128 transmission and suspension components in a fashionable fast- and later hatch-back 2-door sedan.
The Fiat 850 was also produced under the name Pirin-Fiat in Lovech, Bulgaria, on the basis of complete knock down (CKD) kits between 1967 and 1971.
Between 1978 and 1983, the U.S. government issued a highly unusual recall for the Fiat 850going back 10 yearsfor rust problems.
In 1967, Road & Track called the Fiat 850 coupe "one of the handsomest, best-balanced designs ever seen on a small car."
Specifications.
Bodywork. Length/width/height/wheelbase  cm (in) : 365/150/130/203 (143.7/59.1/51.2/79.9); weight : 720 kg.
Engine. Straight 4 903 cc (55 ci), rear mounted, 8 valves, 1 carburettor, 4 speed manual, rear-wheel drive. Maximum power : 58 bhp 6000 rpm; torque : 66 Nm 4000 rpm. Top speed : 150 km/h (93 mph
Read more