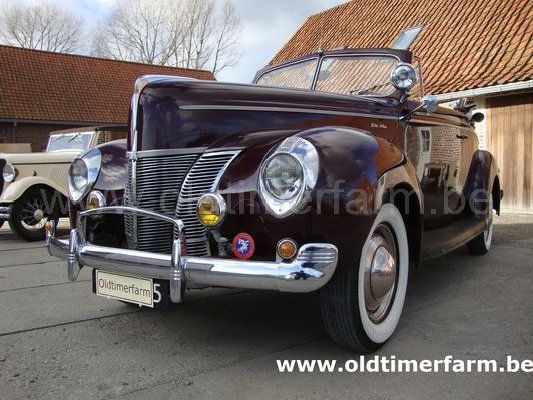 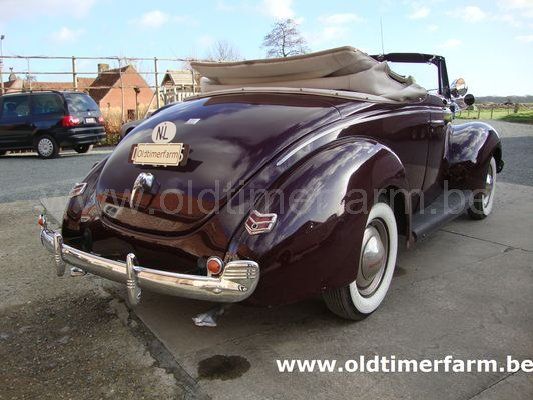 flathead, superbly original Engine: 85 (60) hp/rpm, V8 - cyl, 221,0 (136,0) cid Bore/Stroke: 3,06/3,75 (2,60/3,20) inches Compression ratio ? : 1 Dimensions (01A DeLuxe Tudor): length: 188,25 in, width: 68 in, height: ? Road clearance: ?mm Front wheel track: 55,75 in Rear track: 58,25 in Carburettor: ? Gearbox: 3 speed + back Brakes: Lockheed, hydraulic Maximal speed: ? km/h Tyres: Fuel tank capacity: ? L Fuel consumption: ? L/100km Sources of photos:
Ford Motor Company introduced its De Luxe Ford line in 1938 as an upscale alternative to bridge the gap between its base model (usually called Standard)[3] and luxury Lincoln offerings. The "Deluxe" name was used intermittently before and after this to specify an upscale trim, but the De Luxe Ford line was differentiated as a separate "marque within a marque" with separate styling and pricing through 1940. During 1939, Ford had five lines of cars: Ford, De Luxe Ford, Mercury, Lincoln-Zephyr, and Lincoln. After the war, this was simplified to Ford, Mercury, and Lincoln. The 1941 Ford line included "De Luxe" and "Super De Luxe" trim, but these vehicles were not marketed as a separate line.
The De Luxe Fords of 1938 featured a more sloping hood and ornamental heart-shaped grille. This look was passed on to the standard line for 1939, as the De Luxe Fords gained sharp v-shaped grilles with vertical bars. The standard line once again inherited the De Luxe look for 1940, this time with body-colored vertical bars. The 1940 De Luxe Ford featured a three-part grille with horizontal bars.
The Ford Model B remained in production until 1932 but it was often overlooked due to its eight-cylinder sibling which offered 65 horsepower for just $50 more. The base V8 Ford was the Model 18 Roadster which sold for $460.
The first versions of the V8 were not without their faults. It took a few years to iron out the vehicles problems such as overheating and poor lubrication. Within a short amount of time, the problems were resolved and the V8 quickly etched their way into the market place as a dominant and low cost vehicle that offered more standard horsepower at a lower price than the competition.
In 1933 the horsepower was boosted by 10 and now registered at an impressive 75. That figure was increased by another 10 in the following year.
Throughout the mid 1930's, the styling of the V8 Ford gradually changed, thanks in part to the new president of the Ford Motor Company, Edsel Ford. The most obvious and appreciated change was the grille which became more curvaceous and modern.
In 1939 the cars were reluctantly given Lockheed Hydraulic brakes. The slow adaptation of this technology was due to Henry Ford's reluctance to change. With these new brakes the car was able to stop as well as they were able to accelerate.