Brought into production in 1924 the Packard straight eight side valve engine was a near vibration free luxury car power plant ideally suited to the prestigious cars it was installed in. The Packard 626 was fitted with that 319 cu in (5,230cc) straight eight engine which produced 90bhp at a leisurely 3200rpm and was mated to a three speed manual gearbox operated by a floor mounted gear lever.

The Packard 626 version of Packard’s Standard Eight was introduced in 1929 and had a 126.5″ wheelbase. The car was available in three body styles; the five passenger sedan,  a 2/4 passenger coupé, and a convertible coupé. The car had four wheel cable operated drum brakes, suspension being a typical leaf spring arrangement front and back. Standard features on the car included wind-up windows and a crank out windscreen for ventilation, and for use in fog. The featured car also has a hand operated spotlight for reading road signs and house numbers etc., a common accessory on luxury cars of the twenties and thirties.

The Packard 626 was a mostly hand made car, and a beautifully made one. They developed a reputation for craftsmanship in construction and reliability in operation. They were and still are highly desirable.

If you really want one of the nicest cars made in the twenties this one may well be what you are looking for. It will of course serve as the perfect vehicle for transport of your Colt 1911 and your 1928 Thompson. 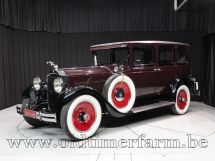 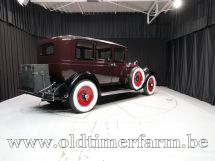