The Volvo PV is a series of two-door, four-passenger car models — the PV444 and the PV544 — made from 1947 to 1966. During WW2, Volvo decided that a new, smaller car that could deliver good fuel economy would assure the company's future. A raw materials shortage during the war drove home the point that an automobile should be smaller, and also complicated Volvo's ability to mass-produce the product. In 1944, when the car was finally introduced to a car-hungry public, response was very positive and orders poured in from the Swedish population. It was another three years though, until 1947, before series production began.

The PV quickly earned a reputation for being strong and rugged, although the design was considered outdated from early on. The PV also competed successfully, in the American SCCA class but also internationally, with a second-hand PV544 memorably winning the Safari Rally in 1965.

The PV444 was Volvo's first uni-body car. It was also the first Volvo in almost 20 years to come with a 4-cylinder engine (earlier models had used side-valve straight-sixes). The first PV444s were powered by a 40 PS 1.4 L straight-four engine designate straight sixes.

In 1958, the PV544 was phased in. Subtle differences with the PV444 included the introduction of a curved one-piece windshield to replace the two panes of flat glass, larger taillights, and a ribbon-type speedometer. The 444's 3-speed manual transmission was also supplanted by a 4-speed unit in the 544. The interior was modified to accommodate 5 persons instead of 4 by increasing the width of the back seat and using thinner backrests of the front seats. This way the car could become a little roomier on the inside while keeping the same body.

The next significant change occurred in 1962, when the B16 was replaced by Volvo's new B18 engine, initially developed for the P1800 sports car introduced the previous year.  The PV544 was also made as an estate (wagon) version, the Duett, initially designated the P445 and later the P210. 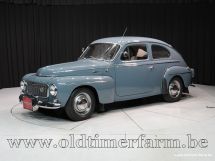 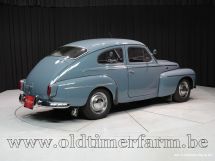