An iconic roadster of the second half of the 20th century, the Alfa Romeo Spider was produced from 1966 to 1994 (28 years!) In 4 distinct series: first 1966 to 1968, the second from 1969 to 1982, the third from 1983 to 1989, and finally the fourth from 1990 to 1994. It is initially the discoverable version of the Giulia sedan, bodied by maestro Pininfarina. The purity and simplicity of the design explain the long life of this magnificent roadster. The first series, called "osso di seppia" (cuttlefish bone) was presented in the United States in May 1966 and became immediately a star! The number of films in which she appears is particularly extensive, the most famous being undoubtedly The Graduate (the Laureate) with the young Dustin Hoffman. After the third series, sometimes unloved by purists because of its added black plastic elements (for safety reasons), the 4 series returns to its roots by getting rid of these "plastoc" appendages: the front bumpers are now integrated into the body and tinted in the same color. The steering is standard, and three engines are offered: 1.6-liter carburettor, 2-liter injection, and 2-liter injection and catalyst. The Spider is also the last rear-wheel drive Alfa, apart from the SZ / ZR produced in limited quantities, and of course the 4C and 8C of the new millennium. The Spider was replaced in 1995 by the GTV Spider, which was to be designed on the basis of the Fiat Tipo chassis. 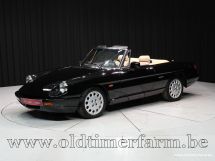 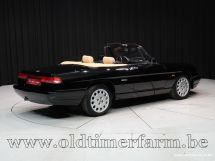